If We Don't Get This Right, We May Pay Dearly For Failing 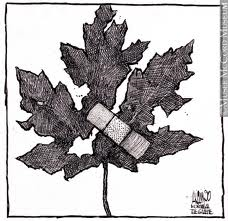 Like most people I had a weak grasp of neoliberalism when ushered in by Thatcher, Reagan and Mulroney as our new default governmental operating system.  It's not easy to pin down which is why it's been so hard to challenge.

We tend to recognize neoliberalism by its components, each of us focusing on the aspects we most dislike.  For some it may be globalization, the global economy, the free trade regime. For others it is the surrender of facets of national sovereignty and the weakening of the nation state. Others resent the intrusion of the invisible hand of the marketplace into our democratic fabric. Many associate neoliberalism with the withering of a once robust and broad based middle class and the choking off of social mobility.  Some recognize it as the engine of inequality and social disparity. Others see it as an alien force that insinuates itself between the voting public and those they elect to high office.

The fact is all of those criticisms are demonstrably true. Even the World Bank and the International Monetary Fund have broken ranks with neoliberalism. They see it as a socially destructive force, a plague on government. Public intellectuals such as John Ralston Saul have denounced it for what it really is, just another faith-based ideology akin to nothing so much as a religion albeit with a 30-year useful shelf life.  Before his death even Milt Friedman, the high priest of neoliberalism, declared it a failed experiment.

Yet this horribly flawed and malignant political-economic model was embraced not just by the Right but also by the Center and even the Left across the developed economies. First embraced it quickly became deeply embedded in western democracy. It still lives in our political caste today and no matter how flawed and how contradictory or how destructive, it's all they know and none has the courage to chart another course. And, yes, that does include Canada and the current Liberal government.

Is neoliberalism really that bad?  Yes, it is that bad. Here's an example. A major part of the neoliberal theology is the pursuit of perpetual, exponential GDP growth. That is the yardstick by which neoliberals measure success. They persist in this horrible orthodoxy even today despite the clear and abundant evidence that we have already exceeded the limits of growth on this very finite planet, an ecological red line we first crossed in the early 70s.

We're exploiting the Earth's resources at somewhat over 1.7 times the planet's resource carrying capacity. We're doing this by "eating our seed corn," rapidly depleting the planet's reserves. Groundwater is a perfect example. Around the world we've maintained this Green Revolution (that  enabled us to expand our human population by threefold in just one lifetime) by rapaciously depleting our groundwater reserves, our ancient aquifers. We have become mortally dependent on pillaging a limited resource that cannot be replenished at anything beyond a small fraction of our demand. And now many of those critical aquifers are nearing the point of exhaustion. Water is becoming harder to find, in some places impossible, even as the need for it steadily expands.

There is an abundance of examples of the folly of perpetual, exponential growth. You can find them all over this blog but that is not the point of this essay. Time to move on.

As I came to recognize neoliberalist globalism as a genuine threat to our civilization and most non-human life on Earth, I began to explore alternatives we might pursue. As neoliberalism is the ultimate dead end road I decided to head back to see what once existed before we turned this treacherous corner.

I think (I'm not sure but I think) I hit the mother lode when I got to the bedrock of progressivism.

A preliminary matter. You may imagine yourself progressive. You may think the party you support is progressive. We've come to perceive that simply being somewhat to the left of the guy on the right qualifies as progressive. It doesn't.

Progressivism, as I have written repeatedly elsewhere and at length, is a philosophy and a series of principles to guide the relationship between a people and their government for the improvement of the general public rather than the narrow special interest, especially the corporatist element that today holds so much power sapping our democracy. Progressivism is a contradiction of the policies of today's Conservatives, Liberals and even, regrettably, the New Democrats.

When I started this blog more than a decade ago, I wrote, "Dedicated to the restoration of progressive democracy." At the time I was thinking of Pierre Trudeau/Lloyd Axworthy liberalism as I had experienced it as a young man. That's what I wanted to bring back. Then came Dion, Ignatieff and J. Trudeau and I realized liberalism as I once saw it had been extinguished.  Some, especially from the NDP, will disagree with that, obviously, but they would do better to examine how their party abandoned the left and drifted to the center under Layton and Mulcair. They have their own atoning to keep themselves plenty busy.

I believe more fervently today than ever before in the need for a progressive restoration. I no longer believe that can be accomplished within either the Liberal or New Dem parties.

Why do I believe we need to change course so abruptly? Because progressivism is our last hope of rebuilding social cohesion among the Canadian public. We, but especially the generations that will follow mine, will need that cohesion, that common bond of will and purpose, to meet the looming challenges that will confront them over the course of this century. These are challenges that are unprecedented in man's history. They'll run the gamut of natural and man-made catastrophes from climate change (severe weather events of increasing frequency, intensity and duration; heatwaves and flash droughts; cyclical and severe flooding; disease and pest migration; sea level rise and more) to crop failures, mass migrations, the destabilization and spread of failed states, and, yes, war.  A people divided, distrustful and hostile will be wiped out. The divisions that neoliberalism engenders are already undermining us.

When it comes to social cohesion, hyper-partisanship is enormously destructive. It pulls us apart and tears us down. It says we're good and they're bad. They must be bad for us to be good. The badder we can make them out to be the better we must be. Both sides can play this rancid game constantly widening the rift by sowing distrust, hostility even paranoia.  And what good comes of this? Nothing. It diminishes us and obstructs reconciliation, dismissing that as an impossibility, a moral lapse. The self-righteousness of these types is nauseating.

Two of my best and oldest friends are devout Conservatives. One of them has done particularly great things in public service as counsel, on the bench, and in elected office.  That particular friend knows that I will always be of the Left as I know he will always be of the Right but that has no bearing on our friendship or our ability to discuss the pressing political issues of the day. I think what keeps our friendship vital over these past three decades is how much common ground we can find between us.

I'll give you a quick example. My opposition to the trafficking in bitumen is pretty obvious. My Conservative friend supports the oil export initiative. He challenged my opposition and I explained the dangerous qualities of bitumen and dilbit. His response? He asked why don't they just refine that stuff on site in Alberta? That was the first time I'd heard a Conservative say that. It showed that there's enough goodwill, enough common ground that we can compromise.  (By the way, I think he just might have voted for Trudeau in 2015, not that he would ever admit it.)

Progressivism, like human decency and goodwill, isn't a function of which party one identifies with. Progressivism was supported by Abraham Lincoln who proclaimed labour to be far the superior of capital. Later it was championed by Republican, Theodore Roosevelt, and then by Democrat, Franklin Roosevelt and his wife Eleanor.  Progressivism rightly spans both sides of the aisle. There is absolutely no reason that Conservatives cannot accept it.  You can trace progressivism straight into the writings of the father of modern conservatism, Edmund Burke. We can't have 40 per cent of the population on the wrong side of these things.

We have hyper-partisans in our ranks too, brimming with self-righteous indignation and always ready to lash out at those they don't find sufficiently partisan. They always paint the other side as ghastly and vile and horrid as though they were aliens, beyond redemption, no common ground to be found. Just like their spitball throwing colleagues on the other side, they obstruct reconciliation and the restoration of social cohesion. Without a sufficient degree of social cohesion, there will be no progressive restoration and the narrow special interests that the neoliberal order serves will prevail.

There is so much rebuilding to do and time is not on our side.
Posted by The Mound of Sound at 11:33 AM

Well said, Mound. The kind of new model we need has been talked about at some length by you and people like Goerge Monbiot. I think the key to ever being able to achieve such a vision is for a selflessness that no longer seems part of modern society, especially at governmental levels, where the desire to secure and hold power seems to be the only real imperative at work.

Add to that a population that seems increasingly addicted to its own pleasures and narrow pursuits and you wind up with a passivity and disengagement that serves no interests other than those of the corporations.

Like you, I remember an earlier time when political differences were handled with respect; the kind of acrid polarization we see today was far less common, I suspect because the parties themselves still had, despite their different ideologies, serving the public good as one of their key roles.

These are issues over which one cannot help but wax nostalgic.

One of my oldest friends is a former Conservative, Mound, who left the party in protest over Stephen Harper's rancid rule. He recently joined the NDP so he could vote in their leadership race. His candidate was Guy Caron who he saw as a social progressive and a fiscal conservative.

My point is that he was willing to move outside the traditional boxes and ally himself with people his former tribe identified as the enemy. We will not solve our challenges -- and they are existential challenges -- until and unless we leave our tribes behind.


I think some degree of basic, mutual respect creates the foundation for altruism, Lorne. That emerges in such things as regard for posterity, for leaving the country better than we found it for those who will follow us. There is an idea formulated by the father of conservatism, Edmund Burke, that resonated throughout America's progressive era.

I so wish I could lay my hands on a copy of Bill Moyer's multi-part TV series on posterity that I think was aired about 20 years ago. It was a fascinating exploration of the role posterity had played in developing so much of the society we enjoyed. It considered how posterity was banished in the new (neoliberal) era and how it might one day return.

I may try to reach Moyers and see if it's available somewhere.


Yes, Owen, and what is the key to ending this crushing weight of tribalism? It's electoral reform once solemnly promised by Justin Trudeau to win our votes.