Will Trump Scuttle the Iran Nuclear Deal? If He Does, Only a Fool Would Trust the United States. 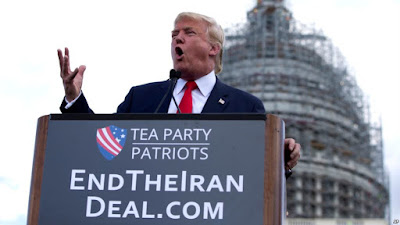 Here's the problem. Donald Trump cannot understand why anyone would believe, much less trust, the United States anyway. He's a pathological liar, he knows that, and he expects others to accept that.

Trump has announced that he will 'decertify' the 2015 Iran nuclear agreement.

Trump faces an October 15 deadline to report to Congress on whether Iran is complying with the agreement and whether he judges the deal to be in the US national interest.

"The administration looks forward to sharing details of our Iran strategy at the appropriate time," said Michael Anton, spokesman for the White House national security council.

Other people familiar with the nine-month review of US military, diplomatic, economic and intelligence approaches toward Iran spoke on condition of anonymity because aspects of the policy are not yet set and Trump has not announced his decision.

Trump's 'Reichstag Fire' excuse is that Iran is in violation of its obligations under the agreement. Of course this is standard Trump bullshit. Even the Chairman of the Joint Chiefs of Staff, Marine general Joseph Dunford, is adamant that Iran is honouring its obligations. It is in compliance.

Dunford warned that U.S. action to pull out of the deal would have unfortunate ripple effects. He said that if the U.S. were to withdrawal without first finding Iran in material breach of the deal, allies would likely question other American treaty obligations. And North Korea, for its part, would have little incentive to enter into talks over its own nuclear program if Washington were to tear up an agreement that, by all accounts, Iran is adhering to.

b
The leader of the world's most dangerous rogue state does not seem to care. He is, after all, a true man/baby whose lack of self-restraint is magnified by his malignant narcissism, his stunted and possibly degraded intellect and his cultivated ignorance. With Trump it's impossible to discern where stupidity stops and senility begins.

This is not an America-Iran deal. All five permanent members of the Security Council plus Germany are signatories to the agreement. Representatives of Iran, China and Russia have already told secretary Tillerson they will not allow the agreement to be re-opened. Even the British embassy in Washington has rebuked Trump's criticism of the Iran accord. German foreign minister, Sigmar Gabriel, has said his country will do whatever it can to dissuade Trump from sabotaging the deal.

There's a lesson in this. America's word, at least while Trump is president, means nothing. Negotiate agreements with the super-rogue state at your peril. As far as Trump and America's Congress are concerned, obligations are a matter of whim, America's whim.

Even the American people seem to have had their fill of their Bullshitter in Chief.  A new poll shows 67 per cent of respondents disapprove of Trump's presidency.  Only 24 per cent believe America is heading in the right direction.  The results are assuring and deeply troubling. It's good to know that more than two-thirds of Americans realize the man/baby is a lousy president. It's troubling that a guy with Trump's litany of character flaws and psychological impairment may look at those numbers and decide he needs to do more to distract the public, perhaps even another war.
Posted by The Mound of Sound at 2:27 PM

Many years ago , Rafe Mair warned.
Beware of Sam Slick ; the American trader.
Sadly, the world ignored these words of wisdom.
The world drops it's pants or knickers to gain access to the huge American market.
Greed has no boundaries , no borders , no morals.
This is why the USA has succeeded.

My my; how times are changing!