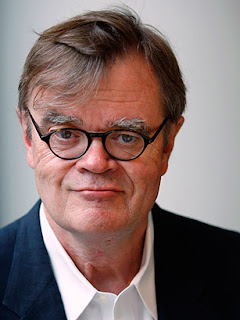 "Donald Trump is Done," from The Chicago Tribune.

When his old campaign manager was indicted Monday, Mr. Trump called me on the phone, crying like a baby, and begged me to endorse him. I said, "You're already president, Mr. President. You were elected." He said, "I'd still like your endorsement." I have a recording of the phone call. It's so sad. Donald Trump is done. He couldn't get elected dogcatcher in New York, his hometown. I was very very nice about it. Very nice. But New Yorkers love dogs and he does not. There are 14 recorded instances of him kicking small dogs, and I have documentary proof of all but two of them.

Plus many other instances of him running around grabbing women's cats. Knocked on the door, grabbed the cat, walked away. Just to show that a famous rich guy could get away with it. Where is the apology? No, the man couldn't even get a job as a school crossing guard in New York. Look at him leading his grandchildren toward the helicopter — thank God there's a Marine there to keep them from walking into the rotor.

He's very wary of children, afraid they'll pull off the wig. It's from La Bouffant on 8th & 45th, 3rd floor. Horsehair. Palomino filly. I have receipts.

Trump shot a man on Fifth Avenue last year just to see if he could get away with it and he did. His base said, "Well, some people just need to be shot, that's all. As a warning to the others." Why is he so hung up on virility? Because the Army rejected him on account of bone spurs that you get from wearing high heels. Everybody knows that.

Just look at how he salutes the Marine honor guard — TOTAL DISASTER — it's not a salute, it's a little yoo-hoo. Uniforms are a huge turn-on for him. And when he salutes the flag, he doesn't even look at it. Total disrespect for the flag. And the salute is very weak in the wrists. Know why there's ABSOLUTELY NO video of him hitting a golf ball? Because (pardon me for being politically incorrect) he swings like a girl. And when he slices it into the parking lot, he tees up another ball. Mr. Mulligan. Mr. Multi-Mulligan.

He sits at that ridiculous little desk in the Oval Office and signs a presidential proclamation as if he's Kim Jong Un or something and he holds it up like a kid holding up his school project that his mama wrote for him. The man can barely read, that's why he hates TelePrompter. Total lightweight.

He is NOT A NICE PERSON and so the name Trump is as popular as herpes these days. Trumpet players have taken up the cornet. Card players refer to the lead suit as the jump suit. Tramps prefer to be called hoboes, town dumps are now refuse heaps, and girls named Dawn are becoming Cheryls. To residents of his crummy building on Fifth Avenue, it's now known as Chump Tower because it's caused so much grief and tragedy for people. It wasn't constructed — it was fabricated. FABRICATED. Plywood modules shipped down from Canada and installed by minimum-wage temps from Hoboken. I can prove this. I have documentation. The wind whistles through the tower at night, roaches the size of rats. Ask anybody.

People who voted for him are humiliated. So his ratings have tanked. The same people who admire him tend to drive Dodge Darts and wear sweatshirts from schools they didn't attend. Nobody stays in his hotels except foreign CEOs and their tootsies. He is weak. Weak on #s, weak on 1st Amendment, worst president in history. Failed @ real estate and now @ politics. His record = BAD. First president in my lifetime who DOES NOT KNOW the words to "The Star-Spangled Banner." The lips are not even moving.


He quit holding rallies in stadiums because nobody wants to go hear a loser brag about his manliness for an hour, you can hear that in any barroom. Only places he can draw a crowd are rural areas where billboards are riddled with bullet holes, shot by men angry because they can't read. He is so over. Totally irrelevant, exhausted, flamed out. The sleepytime eyes and la-di-da hair and the tweet-tweet-tweet say it all. Real men don't tweet. Ask anybody. We bark, we protest, we thunder, condemn, denounce, we give 'em hell, sometimes we post. Wimps tweet. And now the perps are going to start walking and talking. And the fat lady is waiting in the wings.
Posted by The Mound of Sound at 12:47 PM

I saw some of the movie a couple of nights ago. Great music.


Okay, you got me. What movie?

As much as I would like it to be so, Trump is far from finished.
Trump represents all that America adores.
Glamour, riches,fame etc.
Even if he is found to be a tax dodger ( along with his friends) he will still be acceptable because American hate paying taxes.


Hey, everyone. Get a grip. This is the "comic relief" post, a brief respite from bizzaro hisself. Lighten up. Kick back.

Hey, everyone. Get a grip. This is the "comic relief"

Then perhaps! Donald Trump could take this advise; but I doubt it!