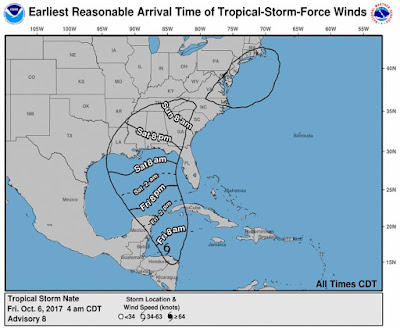 Tropical storm Nate is expected to gather strength as it crosses the warm waters of the Gulf of Mexico and heads for landfall Sunday morning somewhere in Louisiana or Alabama. By the time it reaches US soil it could be a category 1 hurricane. Nate is blamed for killing 22 people in central America, mainly due to flooding.

The southern US has still not recovered from hurricanes Harvey and Irma. Again, heavy rains and flooding are expected from Nate. The expected storm surge may be compounded by 'king tides.' A storm surge warning has been issued for the area between Morgan City, Louisiana and the Alabama-Florida border. That puts New Orleans right in the path of the storm.
Posted by The Mound of Sound at 3:10 PM

People celebrating the warm weather here in Toronto remind me of a story I heard about people congratulating a woman for looking good, but whose loss of weight was due to the early stages of terminal cancer. (They'd already heard she had cancer.)

Grim, Thwap, but I get it