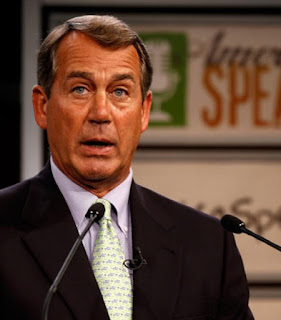 He was a movement conservative, through and through, and a Republican powerhouse in his day, but former GOP house speaker, John Boehner, doesn't think much of the current Republican crew in Congress or the White House.

Despite his remove, Boehner has been following Trump's ascendance with a critical eye. “Everything else he’s done (in office) has been a complete disaster,” the former Speaker told the Associated Press over the summer. “He’s still learning how to be president.” And as Politico discovered in a long-form interview with Boehner, the Ohio Republican is still haunted by the idea that he paved the way for Trump's takeover of the G.O.P. That idea may have some merit—he was, after all, part of the party's first wave of outsider populism when he was elected in 1994—but in over 18 hours of conversation with Politico’s Tim Alberta, Boehner, now golfing frequently and ironing his underwear in peace, opened up about his frustration with today's Republican party.

The Politico interview with Boehner is here.

"Everything he’s done (in office) has been a complete disaster,” applies just as well to Boehner. The lush set the table for Trump. He doesn't get to wash his hands of the disaster when someone comes along who's willing to yell the parts he was saying quietly. Screw Boehner's attempt to rehabilitate himself.