Will China Topple the Petro-Dollar? 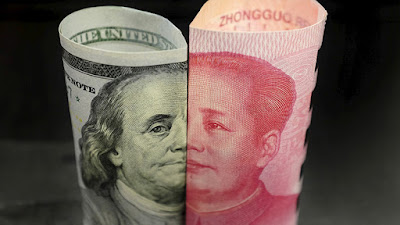 The United States has reaped enormous benefits from the global consensus that treats the US dollar as the world's reserve currency. No country, it seems, is as aware of this advantage nor as determined to end it than the new largest economy of them all, China.

For decades the United States and Saudi Arabia maintained a pact that ensured exclusivity for the American greenback. That may soon be over.

Saudi Arabia is not just being courted by the Trump administration. Without the pomp and circumstance of the Riyadh summit, where Trump addressed representatives from across the Muslim world earlier this year, the Chinese government is taking quiet steps to bring Saudi Arabia’s hydrocarbon reserves firmly into its orbit. Through its ambitious Belt and Road Initiative and a reported offer to invest in the kingdom’s state-owned oil company, Saudi Aramco, the Chinese are laying the groundwork for a profound economic shift in the Middle East and the world.
...

Forged by U.S. President Richard Nixon and Saudi King Faisal bin Abdulaziz Al Saud in 1973, the petrodollar system has wedded the greenback to the world’s most sought-after commodity.

In return for conducting energy sales exclusively in dollars, the United States agreed to sell Saudi Arabia advanced military equipment. One obvious reason China wants oil to be traded in yuan is to increase global demand for yuan-denominated assets. This would increase capital inflows and may eventually lead to the yuan being a plausible global alternative to the American dollar. Saudi Arabia is OPEC’s historic swing producer and price arbiter — if it agreed to conduct transactions in currencies other than the dollar, other OPEC producers would be forced to follow suit.

Beijing’s thinking is also influenced by geopolitical calculations. China’s return on investment in Saudi infrastructure could take decades, but Beijing would gain a valuable foothold in the Gulf and possibly persuade one of the world’s leading oil producers to upend the way oil is traded. Moreover, Saudi Arabia and its Gulf allies, especially the United Arab Emirates, provide a valuable hub to Middle Eastern and African markets through their ports, airports, and global networks. This spring and summer, Beijing and Riyadh announced a number of deals in various sectors, including increased energy exports and a reported $20 billion shared investment fund.

The Chinese have not given Saudi Arabia much time to consider its options. Chinese state-owned oil companies PetroChina and Sinopec have already expressed interest in a direct purchase of 5 percent of Saudi Aramco. This could prove to be a boon for Crown Prince Mohammed bin Salman, who has been eager to achieve a $2 trillion valuation of Aramco in a highly anticipated initial public offering, which is currently scheduled for 2018.
...

For Mohammed bin Salman, Chinese investment in Aramco could kick-start a new economic partnership with Beijing.  As part of its economic reform, Saudi Arabia’s ambitious Vision 2030 plan intends to raise foreign direct investment from 3.8 percent of GDP to 5.7 percent, or an additional $12 billion per year.

It is a far safer bet that China would be able and willing to inject that type of money into Saudi Arabia than U.S. private equity and hedge funds. The main reason for this is the difference in Chinese and Western time horizons when considering return on investment. While Western governments and companies have historically had appetite for infrastructure projects that offer a return on investment in a maximum of 30 to 40 years, the Chinese are playing a much longer game — in some cases investing in projects that break even in more than 100 years.

Toppling the petrodollar with the yuan would have ramifications, possibly seismic, throughout the global economy. That could be especially felt by nations most closely tied to the American economy, Canada foremost among them. Yet now that America has become nearly ungovernable it has created a vulnerability that the boys in Beijing cannot pass up.  Becoming the world's dominant power is a matter of more than GDP.

I have to wonder; is the petro yuan a move for Chinese prosperity or Chinese global dominance?
There would be no better a way to bring the USA to heel that by devaluing the USD.
If Venezuela and Iranian oil traded in petro yuans would that bring more oil to the world market and sink tarsands?

While Western governments and companies have historically had appetite for infrastructure projects that offer a return on investment in a maximum of 30 to 40 years, the Chinese are playing a much longer game — in some cases investing in projects that break even in more than 100 years.

I always laugh at this kind of stuff. It's a word-for-word recycling of the "mystical Japanese zaibatsus have Deep Time perspectives that will ensure their total world dominance" orientalist nonsense that was being peddled through the 80s right up until the Japanese crash. Chinese planning is subject to exactly the same epistemological limits as anyone else's. They've pissed away more than a third of their arable land in the last couple of decades, are totally dependent on food and energy imports, are suffering from massive malinvestment in infrastructure and industrial overcapacity, have an incipient debt crisis that would make the late-80s Japanese blush, etc. These are the same kinds of behaviours that we see in societies driven by short term profit considerations worldwide. The idea that dumping a bunch of money into Saudi's diminishing supply of oil at a time when anything less than the total decarbonisation of economic activity within the next 5-10 years will result in a near-term collapse of global civilisation is some kind of far sighted perspective is a sick joke.


I certainly agree with you on China's self-inflicted woes, subunit, having discussed them at length in many posts on this site. The depth of your comments is appreciated.

You may not have read earlier posts in which I opine that climate change is one of three looming existential threats that could crunch the global economy, the other two being the pressures and knock-on effects of overpopulation and our excessive consumption of renewable resources. As we seem unable or unwilling to wrestle the global population back down to a sustainable number and, worse, have become mortally dependent on greatly exceeding the planet's ecological carrying capacity how long do you give our modern civilization? It strikes me that our inability or unwillingness to acknowledge the magnitude of these challenges and the manner in which they're linked, deprives us of much hope of effective planning for dealing with them.

China is making its move now, when the U.S.A. is consumed by its own problems. Smart move by China. it will give it the hold it needs in countries. making a deal with Saudi Arabia will extend China's international influence and give them a steady source of oil. It may also make it easier to "influence" Saudi Arabia. How this plays out for the rest of the world, who knows.

China is also trying to purchase one of Canada's largest construction companies. China is essentially on a buying binge. Once it has what it wants, it will be telling other countries how the new game will be played. where this leaves countries such as Canada remains to be seen.

It maybe China is making a lot of these types of deals because they have a huge population which needs to go somewhere and a lot of China has been destroyed by pollution. Lets hope they don't do it to the rest of the world.

MoS- was not attributing the article's absurd perspective to you, I have been reading off and on for a few years and am aware that you are sane.

In 2011 NCAR published a paper [https://sci-hub.io/10.1002/wcc.81] demonstrating that the Great Plains would be permanently dustbowled (IMO implying end of industrial modernity in North America) by about 2035 under business-as-usual emissions scenarios. The funny thing was that the result was updated a year later because they'd messed up the modelling and exaggerated the severity of this effect- the "less severe" result was that the mean drought index would be about the same as the 30s Dust Bowl drought rather than twice as bad (!). A few years back Minqi Li published a nice book ("China and the 21st Century Crisis") which I think convincingly demonstrated that China's environmental and (thermo)economic problems would cause their present system to collapse in the 2025-2035 timeframe as well. I kind of suspect that we're in for a serious financial crisis over the next 1-3 years which may knock the emissions track down some, but probably not enough to affect the general trajectory significantly- the hard wall, outer limit of business as usual is probably no more than 25 years out.

I agree that the total inability to even discuss this sort of analysis in the public sphere means we are unable to plan on the level of organisation required to produce credible alternatives to driving into the brick wall. It is possible that we could collectively ask the question of what our society would need to look like in order to avert the worst of what is coming, but I think that everyone senses that the answer is a painful, hard one. Confronting it would mean the recognition that "Progress" is an ideological substitute for religious eschatological expectations and not natural law- and who can live without hope for the future, either in this world or the next? George Grant understood this- he died, I think, in hope that Canada would be able to come to terms with it, that we would not be condemned to become a nation of Nietzsche's nihilists and Last Men. I hope he was right.

My little girl is just over a year old now. It is very strange to think that by the time she is an adult it is almost a guarantee that her world will be utterly unlike the one I grew up in and took for granted. Sometimes people say that the same was true of my own parents, but that's not really the case- like me, they could expect to be able to find paying work, to have access to a hot meal every day, to have antibiotics that work. For her- only God knows.