They're Back. Putin Exploits Trump Again. This Time It's Cuba. 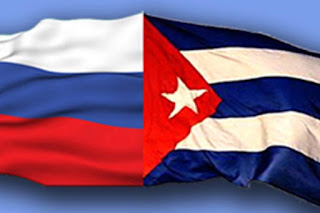 Donald Trump may be incapable of doing anything good for the United States but he keeps delivering a bountiful windfall to Beijing and Moscow. As Trump tears down or undermines traditional alliances abroad, China and Russia move rapidly to exploit opportunities.

Now Moscow is turning to Havana. Trump wants to give Cuba the cold shoulder. Putin doesn't mind. All the more good pickings for Vlad & Company.  For starters Russia is planning to reactivate its massive electronic eavesdropping facility closed by Putin himself in 2001 to cut costs.

And this time the Russia-Cuba deal won't be about cheap cane sugar and rum. This time Russia is looking to help Cuba exploit its offshore oil resources.


In 2014, Russia forgave 90 percent of Cuba's debt. The remaining $3.5 billion is supposed to be settled by giving preferential treatment to Russian investments on the island.

Thus Rosneft is involved in the modernization of Cuba's largest refinery in Cienfuegos, even through Venezuela has drastically reduced its oil deliveries. Instead of 100,000 barrels a day, Caracas is currently only delivering about 55,000 barrels a day to the Caribbean island. Against this background, Cuba has also extended test drilling in the Gulf of Mexico. Unsurprisingly, Russian companies are also involved in this initiative.

In September, both countries signed a whole package of agreements, including in the energy and railroad sectors, while other agreements cover food production and the textile industry. In addition, Russia is suppling trucks, buses and elevators. The island also expects around 100,000 Russian tourists this year.

In all, trade between Russia and Cuba rose 73 percent in the first half of 2017 to $176 million. It is still a long way from Cuba's biggest trading partners — China and Venezuela — but the trend is clear.

Russia also signed an agreement at the end of 2016 to modernize Cuba's armed forces. And reports keep appearing that Russia could again open a military base on Cuba. However, this seems unlikely since Havana is still interested in a stable relationship with the US.

Yet while the tensions between the US and Cuba grow under Donald Trump, countries like China, Iran and Russia are stepping into the breach.

"Cuba is trying to diversify its relations," says Richard Feinberg, an expert on Latin America at the Brookings Institution. "As closer economic relations with the US are not likely to occur in the coming years, one has to look for alternative allies, especially strong countries such as Russia and China can offer favorable payment conditions."

This is all the logical consequence of the U.S. still feeling it is the world's top dog, Mound. They are learning, to their ultimate dismay, that trying to treat Cuba as if it were still the early sixties is going to bite them on the ass massively. Pride goeth before the fall, as the saying goes.


Trump's ignorance is breathtaking, Lorne. He ignores complexity and has no sense of nuance. To the world Trump resembles nothing so much as the angry old white guy in his rocker on the front porch yelling at the future to get the f#@k off his lawn.

Thug that I think he is; Putin is a shrewd operator.
He has made his mark in the middle east with the Russian cooperation with Syria now it's Cuba.
I believe Russia just held war games with India!
Outmaneuvered and outsmarted the US decline accelerates.


Trump has limited interests, TB, and foreign policy isn't one of them. He doesn't seem to understand the importance of things that don't have some immediate monetary quality such as long term alliances. We didn't like the trade aspects of the TPP but America's Asian allies saw it more in a geopolitical context with US as their historic protector. When Trump ditched the TPP they began to question Washington's reliability. Then, when he went on his America first rampage, the hard reality that they might be better off with China set in. Thailand is now said to be on the verge of switching allegiances. China is also eating America's lunch in Africa and increasing its influence across South America. Putin, with NATO at Russia's doorstep and a sanctions beating, would be delighted to retaliate by reviving its presence in Cuba.