What Worries Billionaires? You and Me, Us. 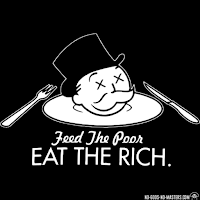 Not since the time of the Carnegies, Rockefellers and Vanderbilts
at the turn of the 20th century was so much owned by so few

I'm pretty sure I've never spent time with a billionaire.  I've never had the chance to hear them out, what makes them tick, what troubles them, their deepest worries. It can't be easy, tossing around at night with dreams of guillotines, gilded of course.

Billionaires increased their combined global wealth by almost a fifth last year to a record $6tn (£4.5tn) – more than twice the GDP of the UK. There are now 1,542 dollar billionaires across the world, after 145 multi-millionaires saw their wealth tick over into nine-zero fortunes last year, according to the UBS / PwC Billionaires report.

Josef Stadler, lead author of the report and UBS’s head of global ultra high net worth, said his billionaire clients are concerned that growing inequality between rich and poor could lead to a “strike back”.

“We’re at an inflection point,” Stadler said. “Wealth concentration is as high as in 1905, this is something billionaires are concerned about.

“The problem is the power of interest on interest – that makes big money bigger and, the question is to what extent is that sustainable and at what point will society intervene and strike back?”

Stadler added: “We are now two years into the peak of the second Gilded Age.”

It's not like they're feeling much love these days from the International Monetary Fund that recently prescribed what is essentially confiscatory taxation to relieve billionaires of the burden of their excess wealth and use it to diminish the scourge of inequality.

Billionaires’ fortunes increased by 17% on average last year due to the strong performance of their companies and investments, particularly in technology and commodities. The billionaires’ average return was double that achieved by the world’s stock markets and far more than the average interest rates of just 0.35% offered by UK instant-access high street bank accounts.

And now for something, well, not entirely different.

Apparently, mr.lampert is one of those suitable for the "gilded treatment."
http://www.businessinsider.com/how-eddie-lampert-set-sears-up-to-fail-2017-5


Perhaps Lampert ought to be swinging from a lampost, "pour encourager les autres."