The Rape of Puerto Rico 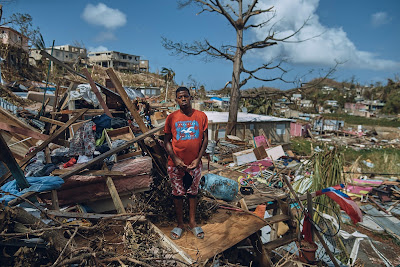 The US island territory of Puerto Rico has had a rough time of it going back years before the devastation of Hurricane Maria.  The hurricane did, however, take down the remnants of PR's flagging electrical grid. Now a contract has been let to restore the grid and that's good news and very bad news for the rapidly declining population of Puerto Rico.

When the Americans conquered Iraq and set up a provisional government in Baghdad there were endless stories of people with no experience jumping into positions of high responsibility and of the waste/loss of hundreds of millions, more like several billions of dollars of aid cash. Anybody who could get a team with an idea to Baghdad seemed to be rewarded with a pallet of crisp greenbacks.

Is Puerto Rico poised for the same treatment? Jaws dropped when the no-bid $300 million electrical grid contract  was awarded to Whitefish Energy, a 2 year old Montana company headquartered in a cabin that, until recently, had just two permanent employees.

Whitefish has links to both Trump and to Interior Secretary Ryan "Scorched Earth" Zinke who also hails from Whitefish, Montana, population 7,279. Zinke's son also worked for the start-up company.


On Friday, Whitefish's favourite son, Zinke, lashed back at critics. “Only in elitist Washington, D.C., would being from a small town be considered a crime,” Zinke said.

What also makes the Whitefish contract reminiscent of  post-collapse Baghdad are the lavish "free fire zone" labour rates in the deal.


Much of the controversy that has surrounded the contract has focused on the high rates Whitefish is charging for labor. The contract shows those labor rates are pricey indeed: $240 an hour for a general foreman and $227 for a lineman. The per diems are also expensive: almost $80 a day for meals, and $332 a day for lodging. Employee flights are billed at $1,000 each way.

For subcontractors, the bulk of Whitefish's workforce, the prices go even higher. A general foreman costs $336 an hour and a lineman, $319.

Now, to make sense of those figures, a fully qualified lineman in Canada makes an average of just over $41 an hour. In California it's $47 an hour, USD, and $39 an hour in Arizona.

Whitefish Energy isn't doing much of the work perhaps because two-man companies rarely have the personnel, the means and the know-how for rebuilding an electrical grid. No problem. Whitefish is subcontracting the real work and, of course, pocketing its cut.

I don't know but it sure sounds like rape to me.

Associated Press reports that the governor of Puerto Rico, Ricardo Rossello, has called for cancellation of the  Whitefish contract.

The contract in question also forbids financial examination of Whitefish's work ( work may be the wrong word ) and any analysis of contract completion. They will get paid if they do absolutely nothing.

Following upon rumleyfips' comment, I also understand that they are immune from any lawsuits should their work prove defective.

Crony capitalism meets disaster capitalism. What could be better?
Even the Republican-led House Natural Resources Committee smelled a rat and subpoenaed documents from the Puerto Rico power company PREPA to explain how Whitefish landed the no-bid contract.

PREPA even failed to invoke its mutual aid agreement with other power companies before hiring Whitefish. This is highly unusual as mutual aid is the main way power companies in states like Florida and Texas repair their damaged infrastructure at a reasonable cost.

So consider the corporate welfare scheme we've got here. Govermnent is paying nine times the going rate for skilled labour to the private sector, which will import those workers from outside Puerto Rico. Puerto Ricans who are in desperate need of jobs won't benefit. Whitefish hasn't the expertise to do the job competently and will likely charge far more and produce worse results. This will leave PR with no better infrastructure than it had before. All of this is being done for the benefit of the NY vulture funds that plan to privatize PREPA. This is a blatant example socializing costs and privatizing profits - exactly what we've come to expect from "the party of small government and free enterprise."

Does this make anyone else think of Niaomi Klein ?

Tammany Hall wanted a piece of the action Mound but Klien details how predatory firms use disasters to prey on vulnerable people.

I'm wondering how Erik Prince will cash in on this one.

"Does this make anyone else think of Niaomi Klein ?"

Meanwhile the "russkies did it" soap opera provides good cover.

Trump once said that when he leaves the Presidency he will be the first to profit by the position.
I guess this is one way he intends to do just that?
Follow the money..

Sanity restored but not electrical power.