Will Trump Bankrupt the United States? 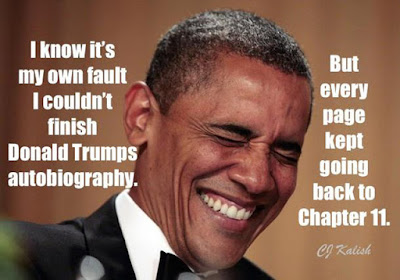 That's a serious question and a genuine prospect. Trump the business genius has established a pattern, one that led to five major business bankruptcies. He's doing it again, this time with the United States of America, and it's hard to imagine he'll achieve a different outcome.

Think back to the eight-year presidencies of Ronald Reagan and George W. Bush. Both spent heavily on the military while cutting income taxes dramatically. Both left the nation with such huge debts that their successors were forced to raise taxes — George H.W. Bush despite his famous campaign promise, and Barack Obama despite the painful aftermath of a deep recession.

Some of Reagan’s and Bush’s advisors also claimed that cutting taxes would increase tax revenue, so great would be the resulting boost to economic activity. That notion has been shown to be false for the United States, time after time. Trump, at least, has employed no such pretension.

Rather, [Trump] has relied on his usual business strategy, starting with the seduction of starry-eyed investors (now voters) with the glamour of the Trump name and promises of monumental proportions. The next steps — the ones that led him to repeated bankruptcies — are more ominous: Lever up a mountain of debt, and then leave others to foot the bill when repayment becomes impossible.

Americans already know what happens when this strategy comes to Washington. Reagan and the younger Bush let the nation live beyond its means, too, stealing from legions of unborn Americans to fund their grand ideas. They also stole from as-yet unelected presidents; whoever followed them in power would be the ones to pay the piper. Their own party would return when times were good again.
...

To be sure, not all of Trump’s economic proposals are irredeemable, yet even the ones that show some promise are half-baked. The corporate income tax is an unnecessarily volatile source of revenue for the federal government, and even experts aren’t really sure how it affects the economy. So lowering the rate from 35 percent to 15 percent — or even eliminating it entirely — isn’t such a bad idea. But the revenue would have to be replaced with other taxes, preferably stable ones like individual income taxes, and Trump has no such plans.

Investing in infrastructure is also something the economy needs, though more now for long-term growth than for any immediate stimulus. Of course that infrastructure must actually be useful for the former effect to take hold, and it’s not clear that a big wall on the nation’s southern border would fit that description. The road system, energy grid, and water and waste systems are far more urgent priorities.

The corporate income tax rate is not as important as actually collecting it.