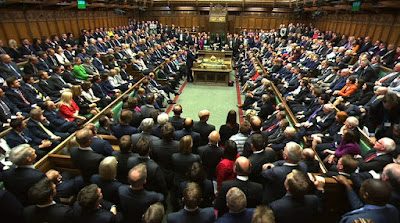 The prime minister announced there'll be a vote tomorrow on a "hard Brexit" - to leave at the end of the month with no agreement. May said it will be a free vote. That would probably isolate the hard Brexit camp. Most MPs seem to find leaving the EU without some deal intolerable.

If that vote is successful it's expected to lead to a follow-on motion to postpone leaving, an extension of Article 50.

May is now raising alternatives - to rescind Article 50 (no Brexit), hold another referendum or try to negotiate another deal with the European Union.

Corbyn seems to want a negotiated customs union or a snap election.

The Scottish National Party has brought a motion that would see Scotland empowered to become an "independent member of the EU."

Speaker Bercow is at his best. MPs seem deflated, worried.
Posted by The Mound of Sound at 12:23 PM

If May had been willing to raise alternatives and negotiate across the floor from the beginning she probably would have had a deal long before now. Her my way or the highway position very much annoyed 391 MPs and much of the country.

Justine are you watching this?


Toby, do me a favour and don't repeat the "Justine" business again. As for May, she really did try to run out the clock to try and coerce MPs into her "deal." It didn't work.

Quite a mess. Tomorrow the House will vote to reject any "hard Brexit." The day after that it will direct the government to file an Article 50 postponement.

It's pretty clear she isn't welcome to return to Brussels with her begging bowl. That means some sort of accommodation with the majority of the House across every party. Whether that results in another referendum, a snap election, or something else is unclear. Today's vote means she won't be able to extract any further concessions from the EU. The Republic of Ireland won't tolerate a hard border nor will Northern Ireland.

What will come from Boris Johnson and the Nigel Farage camp? That'll be fun to watch. I'll be tuning in to LBC radio London.

Mound, that 'e' was a typo. Sorry, I didn't notice it until now. It shows how easy something on the Internet can be misconstrued.

The largest empire the world has ever seen is now reduced to street by street fighting amongst itself.

There are as many opinions of why this is so as there are (not so)United Kingdom inhabitants.
There does not seem to be a national consensus upon what the now multicultural society wants; only what special interest groups wish for at the expense of all others.

They are a selfish, entitled lot the Brits; I'm happy I left the cesspool.

The collapse of free-trade globalization will kill us all!

Imagine having to pay a 7% tariff on your BMW? Oh the humanity!

In inimitable Aussie style, former PM Kevin Rudd ripped into Brexit as "utter bollocks." He calls leaving the EU "longest suicide note in history," and pans the Brexiteer plan to replace EU trade with Commonwealth trade. He rightly points out that "65 million of us do not come within a bull’s roar of Britain’s adjacent market of 450 million Europeans." His op-ed in the Guardian is well worth the read.

What will come from Boris Johnson and the Nigel Farage camp? That'll be fun to watch. I'll be tuning in to LBC radio London.

Sadly they still have a large following, enough so to effect an election.

Voters are really not that smart and Democracy is not so perfect.

Anon 8:59 - you're a rude prick and your remarks aren't needed here.

Thanks for the link, Cap. Rudd is quite right. Britain's "commonwealth" allies, that it ditched on entering the EU, are all thousands of miles distant as is the US. There's no going back. We all have our own webs of trade deals and the UK would have to accept a lot of water in its wine.


TB, I've been listening to LBC. I caught O'Brien's show overnight. It struck me how many pro-Leave callers are still just taking it on faith and ignoring everything that has transpired since the referendum.

They don't see the logic. The EU can't give Britain the same financial deal it extends to its own members. Norway is a clear example. It pays for EU access at a far higher per capita rate than Britain gets within the EU. The Leave camp have this idea they'll get a better deal because that's what Farage has told them.