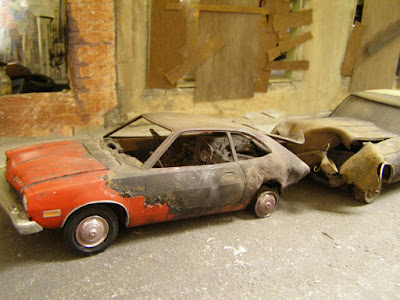 Customers are canceling their orders for Boeing's 737 Max 8 following the loss of two of the jetliners that crashed into the ground after a technical malfunction.

The Ford Motor Company had a similar problem in the 70s with its subcompact car, the Pinto, after a number of rear-end impacts ended with the Pinto's gas tank exploding, immolating the vehicle's occupants.

Ford's problems were compounded when someone leaked an internal document that became known as the "Pinto memo." It was a brutal cost-benefit analysis that concluded that paying damages to those who might die from the gas tank problem would be cheaper than fixing the problem.

The analysis compared the cost of repairs to the societal costs for injuries and deaths related to fires in cases of vehicle rollovers for all cars sold in the US by all manufacturers. The values assigned to serious burn injuries and loss of life were based on values calculated by NHTSA in 1972. In the memo Ford estimated the cost of fuel system modifications to reduce fire risks in rollover events to be $11 per car across 12.5 million cars and light trucks (all manufacturers), for a total of $137 million. The design changes were estimated to save 180 burn deaths and 180 serious injuries per year, a cost to society of $49.5 million.

When the jury saw that memo the law suit did not go well for the Ford Motor Company.

The Pinto wasn't as bad as the public's perception of it but, once public opinion turns, you're done. That may be what lies in store for Boeing.

The traveling public expects airplanes to leave the factory with all the safety systems installed and every aspect of the controls thoroughly tested. That is a misconception.

Chesley Sullenberger, who performed a miraculous deadstick landing on the Hudson River, says the system is broken.


...there is too cozy a relationship between the industry and the regulators. And in too many cases, FAA employees who rightly called for stricter compliance with safety standards and more rigorous design choices have been overruled by FAA management, often under corporate or political pressure.

...Boeing, in developing the 737 Max 8, obviously felt intense competitive pressure to get the new aircraft to market as quickly as possible. When flight testing revealed an issue with meeting the certification standards, they developed a fix, Maneuvering Characteristics Augmentation System (MCAS), but did not tell airline pilots about it. In mitigating one risk, they seem to have created another, greater risk.

After the crash of Lion Air 610 last October, it was apparent that this new risk needed to be effectively addressed. It has been reported that Boeing pushed back in discussions with the FAA about the extent of changes that would be required, and after the second crash, of Ethiopian 302, the Boeing CEO reached out to the U.S. President to try to keep the 737 Max 8 from being grounded in the U.S. The new fix still has not been fielded, nearly five months after Lion Air. It almost certainly could have been done sooner, and should have been. 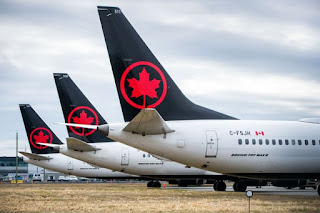 Ever wonder why Canada and the US were the last to ground the 737 Max 8? I do.

Indonesia's national airline has cited a loss of public confidence in Boeing's jetliner in canceling an order for 49 of the airplanes. Others may follow suit. Presumably those orders will now go to the only other game in town, Airbus.

There does seem to be the makings of a scandal here, one that will drag on for quite a while and could cost Boeing dearly. A car company, well that's one thing. The outfit that makes jetliners that auger into the ground, that's something else entirely.

This scandal has legs. Right now the entire fleet of 737 Max 8s worldwide is grounded. Boeing's airline customers can't be happy with the revenue they're losing. Law suits await.
Posted by The Mound of Sound at 8:55 AM

A couple of other things on this tack.

1) I heard an interview the other night with a man who was saying that the FAA in the past couple of decades moved from, as he put it, "enforcement" to "compliance". That is, instead of doing independent testing and enforcing their standards they now tell the manufacturers their standards and let the manufacturers report to them that they have tested to that standard. Very, very different things.

2) I also saw a report that US DoD had halted acceptance of some refueling planes from Boeing after they had one (a few?) delivered that had garbage and other debris in the hull upon delivery.

The SMS scam has always been one. It’s achieved its design purpose.

There's been a trend to empowering industry self-regulation and not just in the United States. That can take two forms. Inspection/regulation can be transferred to the regulated industries or governments can facilitate "regulatory capture" where government boards and tribunals are stacked with industry representatives. Either way the public usually loses.

That Boeing KC-46 issue was dealt with in my post yesterday.


John, I don't understand the SMS reference. Can you explain?

One of the aims of the movement in the health and safety management profession and industry toward the adoption of comprehensive Safety Management Systems was to reduce the excessive regulatory burden by transferring control from the state to the regulated industries. Theoretically the collective of producers within an industry, with an appreciation of the requirement to abide by the regulations that stipulate minimum standards, proposes that having established those standards, there should be a reduced requirement for the involvement of the state as long as the necessary reports asserting compliance are filed. (Industry SMS associations will also take care of assessing the need for any changes in the regulatory structure and advise the state on its determinations. This is facilitated by the movement of professional expertise between government and the private sector.)

Health and safety management is now under new management. Quality control and protection of the environment are drawn into this “holistic” process and, together with the H&S management issues, are swallowed by the firm’s comprehensive risk management plan. Then the state waits until a town gets blown up and goes and takes another look.


Can I get a side of listeria with that grilled ham and cheese?