Once Again, Ottawa Fails the Coast 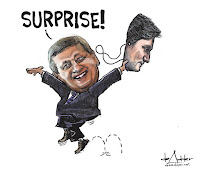 British Columbia's salt water fishery is controlled out of Ottawa by the Department of Fisheries and Oceans. That's the same bunch that bungled the east coast fishery leading to the severe collapse of the once bountiful cod stocks.

Now DFO is screwing up the west coast, starting with our herring stocks.

Those herring play a vital role in maintaining the upper tiers of our food chain. They're the food stock for baleen whales and our prized salmon. Those salmon, in turn, sustain the resident orca population.  Our salmon are now endangered. So too are those magnificent orcas, who may soon also have to cope with Trudeau's armada of bitumen laden supertankers.

Why then is Mr. Trudeau's DFO still allowing our herring to be pillaged?  Ask Ian McAllister, executive director of Pacific Wild.

Pacific Wild, just a day earlier, had posted a video in which McAllister said, among other things, “We really should be leaving this fish in the water ... This is basis for the food supply of the entire Salish Sea, the basis of our coastal economy, and yet we’re turning this wild herring into fish farm pellets and cat food. This fishery should not ever have been allowed.”

...There is an echo here of the infamous standoffs on logging roads in Haida Gwaii, Clayoquot Sound, the Kootenays, the Stein Valley, the Skagit, pick your spot — and of the enduring faceoffs over tarsands pipelines and mines and dams and fish farms and tanker bans, among other so-called policy “choices” that we leave to the least qualified people in the world, politicians, to adjudicate, based on what they piously claim to be reliable science that supports their even more reliable need to shore up their prospects of re-election with evidence of economic growth and jobs for middle-class Canadians.

Jonathan Wilkinson, our federal fisheries minister, personifies the Trudeau-era cabinet-minister-as-dittohead. “It’s in the national interest. It’s in the national interest,” they all chant about the orca-killing Trans Mountain Pipeline Expansion project, all evidence to the contrary. In the case of the herring fishery, “We make our decisions based on science,” Minister Wilkinson says reassuringly, if credulously.

And so this year, while all that science-based management has led to the closure of commercial fisheries in four other major areas of the coast — Haida Gwaii, Prince Rupert, the central coast and the west coast of Vancouver Island — the minister took the advice of his boffins and approved the extraction of 21,493 tonnes of herring in the Strait of Georgia. By Pacific Wild’s calculation, that’s 130 million fish. As of Saturday, the seine fleet had successfully killed about half that number; over the weekend, the gillnet fleet was on target to finish the job.

...At some point, you have to wonder how many fisheries scientists can dance on the head of a pin. Rightly or wrongly, Ottawa thinks the fleet can take 130 million fish out of the water without making a dent in the stock’s “long-term” ability to reproduce. Locally, confidence in that decision is low.

Grant Scott, who chairs Conservancy Hornby Island, says his community first put on a herring festival two years ago as a seasonal celebration of the herring spawn. Within a year it had dawned on them that the festival might better be used to publicize how dire the prospects for herring are. This year, an online petition calling for the fishery to be closed has attracted close to 72,000 signatures and counting.

...To the south of the fleet, another long-term resident and observer of the Salish Sea, Stephen Hume, writes, “If science is so good at predicting abundance, why are 80 per cent of herring sites now closed?

“We’ve fished stocks to collapse before, amid repeated assurances that the fisheries science shows harvests to be sustainable,” he reminds. “In the 1950s, overfishing of Japan’s herring led to a collapse. In the 1960s, the California sardine fishery collapsed. Herring fisheries in Alaska and B.C. were closed in the 1960s after overfished stocks collapsed. Overfishing destroyed herring stocks off Iceland, Norway and Russia around the same time. In 1972, the overfished Peruvian anchovy fishery collapsed. In 1992, Canada’s Atlantic cod went the way of the herring, sardines and anchovies. Cod stocks that had supported Newfoundland fisheries for 500 years suddenly fell to one percent of what it had been at its maximum biomass.”

“One common factor in these serial fisheries disasters,” Hume writes, “is that regulators were convinced harvests were sustainable — until they suddenly weren’t.”

... Pacific Wild has produced an analysis — Top Ten Arguments against the Strait of Georgia commercial seine and gill net herring fishery — and, going to some lengths to reference its conclusions to available science, ends up citing DFO on almost every page. Whether that science can be trusted or not is hardly Pacific Wild’s responsibility; whether its interpretation of DFO science can be trusted, is. But one of the failings of our resource management system now, especially after the Harper years but even now in the Trans Mountain era, is that our agencies are so deeply distrusted because they are so deeply conflicted.

Agencies like DFO and the National Energy Board have tremendous research budgets and their conclusions are backed by authority of law, but they’ve become what environmental lawyer Eugene Kung has referred to as “captured regulators.” They can no longer be trusted to interpret their research in the public interest because of the pressure of private interests: respectively, commercial fishing and fish farm industries, and in the case of the NEB, powerful energy interests.


Why should coastal British Columbians see the federal government as other than a predatory scourge? Instead of protecting our coast and our endangered marine life they unleash their captured regulators, the National Energy Board and DFO, and scream "national interest, national interest" to stifle anyone who stands up to them.

And, before Trudeau's fan club dismiss us as "Trudeau haters" remember this: when Trudeau wanted to fast track his Trans Mountain pipeline, before he actually bought the damned thing, he gathered top officials of all relevant ministries to assess the project. Then, before they submitted their assessments, they were all gathered together in a room and told by Trudeau's envoy those independent evaluations had better support Trans Mountain. And, voila, that's just what they did. That's not just a stacked regulator, that's a stacked PMO and it's stacked against us and our coast.

Why is Trudeau allowing the pillage of cod and the harvesting of fins from whales in Canadian waters? Only oil and coal matter in this country. Plus fish smells.

Harvesting of "fins" from whales? What is that about?

On one hand, I agree that the DFO is almost certainly getting it wrong, and we should be shutting down or at least drastically reducing that fishery. And that the DFO often gets it wrong, and DFO equivalents often, indeed almost consistently, get it wrong world wide.
But I don't see this as a feds vs province thing. Imagine fisheries were regulated by a provincial agency, overseen over many of the last bunch of years by the BC Liberals. Tell me it wouldn't be just as bad or maybe worse. It's about regulatory capture by narrow private-sector interests, people who want the short term money and don't care that much if the stocks disappear because they'll just invest elsewhere (until we run out of planet). And it's about governments, federal and provincial, who are beholden to those narrow corporate interests and their money.

At the same time that the Ministry was shutting down chum openings, because of incidental bycatch of upper Fraiser steelhead, ( 12 years ago),

The DFO was increasing the chum seine net openingsin the Salish Sea to the Mission bridge.

As a result early Fraiser Coho and Upper Fraiser Steelhead are almost extinct and will never recover.

When it’s “just” BC, the locals have a lot more impact, despite regulatory capture.

All BC, the Yukon, the NWT, Innuvit and the Maritimes have in common is a hate for the DFO, Alberta, Sask., Manitoba, Ontario, and most of Quebec don’t give a rats ass.

A sign that we (BC coasters) are royally effed

Joyce Murray recently joined the cabinet when she should have led a bunch of the BC Libs over to the Greens.

.. Canadian Government (PM & PMO) currently dictates to DFO what it shall do.. or any related Ministry. Thus Resources, Environment & Agriculture & don't forget Finance & Tourism. And so the west coast commercial and sport fisheries gets whacked by overfishing, the toxification or blocking of spawning grounds, infection and sea lice via salmon farming and the ever growing aspects of resources stripped & shipped for export ie shipping coming & going. Now did I mention shellfish or Firet Nations ? Or the growing plans for LNG liquifaction plants and ports on the coast and the networks of water pipeline, power right of way, access roads and delivery pipelines ? (BTW - wheee is all that toxified 'water' ending up? Leaching into what part of the BC water table ? There is nothing government will not do to destroy habitat & species in the service of foreign owned multinationals presumably for donations.. Hell, look at the late saint Jim Flaherty holding yearly 'retreats' to get corporate orders from CEO's for Harper to convert into neoliberal legislation. Its 'embedded behaviour' and Trudeau is wrapping up the final stages of Harper's work - and ignoring the SARA mandate just like Harper

NPoV - let's wait and give Murray a chance to see what she's made of. She has opposed Trans Mountain. We'll know soon enough.

Sal, I sometimes wonder why the federal government routinely ignores the precautionary principle even though it has been recognized as the law of the land by superior courts including the SCC.

As for the commercial fishery the world is flush with examples where voracious commercial fleets have literally fished themselves out of existence as they collapsed the very fish stocks on which their industry depends.

As for your sport fishing reference is concerned there are impressive stats on how much revenue the sport fishing industry generates per pound of salmon taken in contrast to the paltry return garnered by the commercial fleets.

Turning herring into fish meal for the fish farms? That's outrageous. Why herring other than that it's easy to pillage. There are plenty of garbage species such as hake - wait, that's now churned into fish sticks.

We're systematically fishing our way down the food chain. I remember years ago some researcher saying bluntly that in the end there will be nothing left in the ocean except nasty little creatures nobody wants to eat. And I'm not so sure about those--the Japanese eat dried jellyfish, I believe, and there's been some experiments processing krill and plankton.

I know about this problem.......Iceland has announced that it is going to kill over 2,000 whales in the next five years. Whale hunting is cruel and inhumane and Iceland's population is against the practice. The International Whaling Commission placed a ban on whaling in the 1980s, yet Iceland continues to hunt and kill whales. Without anyone holding them accountable, Iceland will continue killing these majestic animals. You can put a stop to this. Sign now to urge the International Whaling Commission to hold Iceland accountable.