The Guardian - Theresa May Has Screwed the Pooch 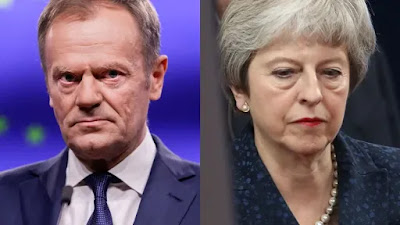 The editorial board of The Guardian isn't mincing words about the Theresa May's bungling of her premiership and Britain's dealings with Europe.

Mrs May has asked the European council to extend the Brexit deadline to 30 June, by which point she hopes that parliament will have stopped obstructing her deal. Donald Tusk, the council president, responded swiftly, confirming that a short extension was on offer, but only if Commons ratification comes first – next week. This ultimatum expresses personal frustration with Mrs May in European capitals. EU leaders can follow UK news. They can see that the prime minister has no control over her party. They know that concessions are wasted on her because she feeds them to the insatiable beast of paranoid Euroscepticism, then comes back pleading for more.

The EU made it clear that an article 50 extension should not be used by Mrs May to keep going round in the same familiar circles. But that is precisely what her letter promises. It requests permission to carry on playing a game that she has lost. A reasonable expectation, given the scale of the current crisis, was that the UK rethink its whole approach to Brexit. No one in Brussels expects great flexibility from Mrs May but it was not beyond imagination that she would bend to the will of parliament. Even that is beyond this most rigid of prime ministers.

...Her political capital is all spent. She has no allies at home or abroad. Her only leverage in parliament comes from the fear that her appalling management of the country provokes – the prospect that she is incompetent enough to allow the worst to happen. She long ago lost sight of diplomacy and strategy. Then she shed authority. Now she has abandoned responsibility, completing the journey from bad prime minister to rogue prime minister.

There’s no way that the EU will apportion EU seats for Britian if the UK is leaving.

All this from the cradle of modern democracy!!
All I can say is; meow.

Nobody leapt into the PM breach after Cameron resigned. No, their survival instincts kicked in and let May have the PM's job, because negotiating a Brexit deal is all a bit too much like hard work for the Borises of this world. Easier to stay outside the inner circle and lob bombs in now and then for shits and giggles.

May turned out to have zero imagination or flair, what the Brits call nous, for the job, so the UK will slide into oblivion March 29. Then the talking head Tories can all blame May and appear untouched by the disaster. Doesn't help the average person that these Conservatives chucked away the country, but the fate of the average person was never their concern, just their votes. There will be a depression in the UK, and the wealthy will leave to let the rest of them stew. So then there will be a split up of the country into Scotland, Northern Ireland and England/Wales. The various Army regiments will be upset and maybe take over England - after all, they swear allegiance to the Queen, not the country. The maple monarchists will predictably be delighted.

"It is the noblest cavalry in Europe, and the worst led."

Sure, it’s fictitious; but I always sensed appropriateness in that line in relation to the British ruling class. And now they don’t even need the slugs to bail them out.

Terrible what can happen when individual members abandon caucus and cabinet solidarity to boost their own reputations by embarrassing others.

A responsible government would have set up committees made up of all sectors of the society (including Scotland, Wales and N. Ireland) to figure out how to deal with this very important issue. Not one party and their dopey little leader clinging on to power. I will never understand how this happened.


I believe historians will be dissecting this corpse with a flensing knife.

The referendum tested the (manipulated) will of the public but failed to consult the electorate on what they actually wanted and what they didn't want. Farage duped them. Cambridge Analytica shaped their votes and the Leave EU campaign filtered illegal funds through Victoria's Aggregate IQ to put its thumb on the scale. Yet even the Remainers are mute to this.

I suspect the parliamentary leadership saw chaos but, out of that chaos, opportunity. They certainly got chaos but not one of them found any profitable opportunity.

What we've also seen is a collapse in party discipline. May has an insurgency in her ranks. Some, like Boris, gladly retreated to the backbench. Others, however, remain in May's cabinet perhaps because she has no one suitable to replace them.

My sympathies are with the Euros. They know this can/will harm the UK and the EU and that they need a deal almost as much as the Brits. Yet they can't "reward" the Brits for leaving without expecting similar demands/tactics from other EU members, turning the Union into a complete shambles, just like Westminster. After lengthy negotiations the Euros made an offer, the May government accepted it, her parliament wouldn't support it so back she went, begging bowl in hand. Brussels tried to give May clarification/assurances but parliament still wouldn't have it.

May could never accept the fact that she gored herself when she called a snap election, gambling that the electorate would hand her a massive majority. She lost. The only party willing to dance with the Tories was DUP, the worst of the lot. The EU dug in, determined to protect the Irish Republic against an obvious threat from Westminster and that meant an open border with the north, guaranteed by the "backstop." This, the hard Brexit contingent, denounced as relegating the UK to the status of an EU vassal.

Now May desperately needs an extension of the deadline she triggered but she has nothing to offer. She has lost control of parliament. She cannot control her own caucus. She begs for time to ram through her "deal" on a third or possibly fourth vote in the House, having already failed spectacularly twice.

European council elections loom. Britain cannot possibly participate if it intends to leave. TM wants an extension to the end of June. Ridiculous. It's only logical that the EU would consider only a brief extension and only on condition that, by this time next week, she has persuaded parliament to change its mind and support her deal.

And then, to cap it off, she goes on national television last night to blame this chaos entirely on those shit MPs on both sides of the aisle, rejecting any responsibility on her own part. Just when she needs whatever support she can get from those MPs she craps all over them.

As one pundit put it, the Euros have televisions. They can see May floundering in parliament. She's an empty vessel and her promises cannot be taken at face value. Give her time and she will only come back with new demands that they cannot accept.