Why the Brits Ignored How 'Leave' Rigged the Brexit Referendum 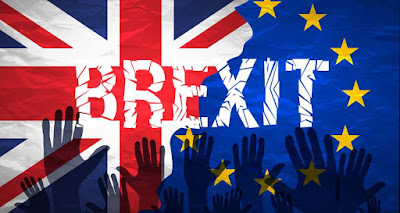 The Leave campaign had its thumb on the scales in the Brexit referendum. Through various devices it was a rigged outcome. Now the national crime agency is investigating some of the culprits. The list of suspects includes a number of shady Brits but also a few prominent Americans and perhaps even a Russian or two.

“The thing is that there was such a huge weight of evidence which has now all been proven,” says Wylie. “Vote Leave broke the law. I can say that out loud now. Vote Leave broke the law. But nothing happened. It’s insane to me that people get more upset by doping in the Olympics, when the consequence of this is an irreversible change to the constitutional settlement of the country.”

It is insane but why, how?

The best answer I've come up with is from an article in the Irish Times from July, 2018. Everyone, the Conservative government, the opposition Labour Party, the media including the vaunted BBC, even the British public simply chose to ignore it. Evidence of criminality and other wrongdoing - mountains of it - doesn't matter. The country is tearing itself apart, its parliament a hopeless shambles, over a rigged vote - and the corruption doesn't matter.

In a stinging report, the Electoral Commission found that Vote Leave had broken the law by failing to include Grimes’s spending in their return.

The official Leave campaign breached spending limits by almost half a million pounds. That’s a significant amount in British politics, especially in a knife-edge referendum like Brexit.

Nor is this the first time that the British elections regulator has found serious irregularities in how the campaign to leave the EU was won.
In May, another pro-Brexit campaign, Leave.EU, was fined £70,000, again for breaking electoral law. Leave.EU was bankrolled by Arron Banks, a controversial businessman who emerged from obscurity to become the biggest donor in British political history, giving more than £8 million to pro-Brexit groups.

The extent and source of Banks’s fortune has been under discussion, as have his political connections. Recent reports revealed that Banks had extensive, previously undisclosed meetings with the Russian ambassador in London in the run-up to the Brexit vote.

Then, on the night of the referendum former Ukip leader Nigel Farage twice conceded defeat live on British television. When the results came in sterling’s value collapsed, and a number of prominent pro-Brexit hedge fund managers made millions.

So, what has been the response in Britain to all this? A parliamentary inquiry? Politicians on all sides demanding changes to electoral law to protect the democratic processes?

Not exactly. On Tuesday, Conservative MP Nadine Dorries accused the Electoral Commission – an independent regulator – of being biased.

News that the largest Brexit campaign broke the law has provoked hardly a peep from the party of government.

The opposition benches have scarcely been much louder. With a few honourable exceptions, Jeremy Corbyn’s Labour Party has been largely silent, no doubt wary of being seen to oppose “the will of the people”.

...But it is not just Britain’s parliament that has been incapacitated by Brexit. Almost every aspect of British public life is now refracted through the simplistic slogans of June 2016.

Take the media. Ordinarily news that the largest campaign in British political history had broken the law would be met with headlines excoriating Boris Johnson and Michael Gove – both senior figures in Vote Leave – and calling for full investigations.

But these are not ordinary times. In a climate where some newspaper front pages have declared judges “the enemies of the people” and called on May to “crush the saboteurs”, there is a marked reluctance to pose awkward questions about how the referendum was won.

Brexit has revealed the poverty of the system that regulates British democracy. The Electoral Commission itself only looked in depth at Vote Leave after internal emails released under Freedom of Information legislation showed that the watchdog was deeply uneasy about the campaign’s spending but was wary of launching a full investigation.

...Remarkably, unlike a general election, the victory in the referendum cannot be challenged in an election court because the vote was not legally binding.

Brexit means Brexit. But does Brexit mean ignoring mounting evidence that the democratic process was compromised during the 2016 referendum? If that’s the case, then Britain could be living with the consequences of the vote to leave the EU long, long after March 2019.

Bear in mind that everything you've read from this Irish Times report was before the UK's National Crime Agency launched a criminal investigation into the Leave campaign and its officials, an investigation that's still underway.

Add it all up. 1. Brexit was a "non-binding" referendum. There was nothing carved in stone. At best it was a loose effort at testing the waters. By virtue of being non-binding there must have been many people who simply gave voting a pass, content to leave the issue to parliament. 2. Evidence surfaced of financial chicanery by the Leave campaign that was confirmed by the country's Electoral Commission. 3. Evidence emerged of the covert role played by an American-owned Cambridge Analytica, a company developed to manipulate public opinion for electoral purposes.  A company that was owned by American far right billionaire, Robert Mercer, and directed by noneother than Steve Bannon. A company that was exposed by hidden camera video promising to rig an African election. A company that was thrown into liquidation quickly upon being exposed. 4. With all this evidence of corruption, Leave won the non-binding referendum by a very narrow, 52-48 margin, hardly a conclusive result. Nobody went to the polling station believing such a result could plunge Britain into a deal that even today cannot be defined that could plunge the UK and the EU into a no-deal "hard Brexit."

Despite all of these problems, 1, 2, 3, and 4 above, the Tories treated this dodgy result as a binding obligation to tear the UK out of the European Union and the opposition Labour leader and his caucus went along with it.

Hard as this is to believe, nobody in Britain is willing to defend the country's democracy and its institutions. They would rather sweep the dirt under the carpet and get on with leaving the European Union, even if that wrecks their economy.
Posted by The Mound of Sound at 11:45 AM


Why don't you tell us, John? I'd really like to know.


Wow, TB, those are awesome. I completely missed that item. Thanks.