Forget J W-R. What If We Had an AOC in Government? 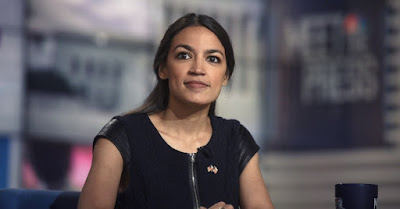 She's something of a darling to Canadian progressives. Alexandria Ocasio-Cortez, the brash young woman out to shake up the moribund Democrats and take down Trump and his Repugs.

Imagine, she's at the podium addressing an overflow audience. Beside her at the head table sits Justin Trudeau and the Liberal front bench. AOC begins to speak, an address that could as easily be given in Canada as it was in the States.

Ocasio-Cortez came out strongly against moderates, expressing disbelief that it is often talked about as a desirable quality in politicians. “Moderate is not a stance. It’s just an attitude towards life of, like, ‘meh’,” she said as she shrugged her shoulders and the audience cheered. “We’ve become so cynical, that we view ‘meh,’ or ‘eh’—we view cynicism as an intellectually superior attitude, and we view ambition as youthful naivete when we think about the greatest things we have ever accomplished as a society have been ambitious acts of visions,” she said. Ocasio-Cortez went on: “And the ‘meh’ is like worshipped now for what? Like, for what?” The audience cheered again.

The "meh" government, whose claim to fame is that they're not as bad as that other guy there, "Chuckles."

I'm not sure that AOC would last very long inside Justin Trudeau's caucus. A week, a month, tops. Besides, where would she park the Green New Deal? That's even too ambitious for the New Dems.

If you want to check whether your favourite prime minister measures up to the Green New Deal, here's a backgrounder that might help.

"That's even too ambitious for the New Dems" let the NDP come out with their full platform before judging .

I won't be holding my breath, Gyor. Rachel Notley is tied to the Dippers like an anchor. They'll make no real progress on climate change policy without cutting her loose.

You start with hope and ideas and do what you can. Not a lot different from J Trudeau at the start of his administration.

The last sincere/honest remark I heard a politician say was..

Gas prices have to go up!!
That was Joe Clark ; look what happened to him!

Voters don't like truth , they want promises of better times and screw the rest; regardless of the party.

.. good posts today Mound and yesterday.. the topics inevitably circle around to 'leadership' - and the 'doing of' .. But such endeavor, if any, regarding salvage of our remaining environment, species and habitat.. or political grace as you and Lincoln detailed. But currently we have federa NDP with no identity, a loathsome federal CPC Party 'led' by its war room pedantics that the dully repetitive Scheer repeats and whines and a federal Lkberal Government and Party specializing in screw ups, broken promises and punting the stuff that must be done, that scares them as vote losing or poll losing realities.. all of them spouting of 'growing the economy, jobs jobs jobs for hard working middle class Canadians and getting Canada's 'energy' into pipelines for Asia. Alternative energy and the saving grace, our go green sector get no mention.. our fisheries are toast & procurement a series of fumbled punts with a looming criminal trial the highlight.. the cherry on top. We're truly the frightened mouse sleeping with an elephant.. and seeking economic crumbs and pet neoliberal election fraud tips


It is a pretty miserable offering, Sal. We're in a real "none of the above" era.

I'm wrestling with a piece on what a sustainable future might look like and nowhere can I see any political will for what that would entail.

Jason Hickel's warning that the people of the affluent West would have to ratchet down their consumption of resources from today's 28 tonne per capita annual level to just 8 tonnes per annum seems utterly fantastic, incredible, and incomprehensible.

We only have one direction in our political caste - growth. Anything else to them is heresy. That means there'll be no progressive solutions to this mess.

" I think that there’s a lot of people more concerned about being precisely, factually, and semantically correct than about being morally right. "