Two stories today, both of them grim. 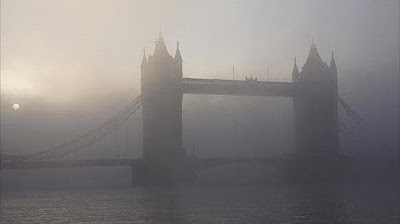 A new report warns that air pollution deaths are double previous estimates. 800,000 deaths a year. No, not worldwide. That's for Europe alone. The culprit? Fossil fuels, of course. The very stuff we're hell bent on pimping to world markets.

Here's another way to look at it. Toxic air in Europe now kills more people than smoking. Wow, that's something, eh?


The scientists used new data to estimate that nearly 800,000 people die prematurely each year in Europe because of dirty air, and that each life is cut short by an average of more than two years. The health damage caused by air pollution in Europe is higher than the global average. Its dense population and poor air results in exposure that is among the highest in the world.

The new research, published in the European Heart Journal, indicates that while air pollution hits the lungs first, its impact via the bloodstream on heart disease and strokes is responsible for twice as many deaths as respiratory diseases.

So, let's cut the crap. Fossil fuels kill. They kill a lot of people and those they don't kill can also endure serious disease and disability. Now, what does that say about the really high-carbon crap - bitumen? I'll bet that you can figure that out. If we get the Justin Trudeau Memorial Pipeline and we start launching an armada of bitumen laden supertankers to Asia, we're killing people.


Next up, plastics. We've all seen the seas of plastic debris forming in our major oceans. Plastic, it does more than just kill fish.


Dangerous sewage pathogens have been found “hitch-hiking” on plastic litter washed up on some of Scotland’s finest bathing beaches, raising concerns from scientists the phenomenon could have far-reaching implications for human health worldwide.

The findings, by the University of Stirling, have confirmed environmentalists’ fears that ubiquitous, persistent and tiny plastic beads, or “nurdles”, found on beaches and in rivers and seas around the world, act as rafts for harmful bacteria, transporting them from sewage outfalls and agricultural runoff to bathing waters and shellfish beds.\

The findings raise the potential for “cholera in India to be transported and washed up on a shore in the USA”, according to Dr Richard Quilliam, the study’s principal investigator.\

“The danger is that pathogens could be transported over large distances and survive for much longer than normal,” Quilliam said.

Plastic, the gift that just keeps on giving.

Considering the sheer numbers that fossil fuels kill it is strange that there is so much fear of nuclear power.


Toby, that's a long story about a movement that was launched out of fears of nuclear Armageddon, "Ban the Bomb," and then blossomed out to opposition to anything nuclear.

Plastic particulate is also in the Great Lakes.


It's pretty much everywhere, UU. It's in the marine life in the Arctic.

What are your thoughts on the air pollution problem? Do you think we ought to be worsening the situation by flooding world markets with the highest carbon ersatz petroleum of them all - bitumen, pitch?

Do you think this policy of our Conservative and Liberal governments with its lethal consequences is supportable?

I believe you're a Liberal. Do you support your government in this?

As a race we continue to act in our own worst interests. And we like to think we're "progressive."


"Progressive" is now an empty word, devoid of meaning, Owen. It has become a sort of laurel wreath that people claim by virtue of nothing more than being even slightly to the left of Conservative.

I am not a Liberal (and will explain more later). Approving pipelines that Indigeonous peoples approve will not make much difference to climate change.

Canada already has a huge emissions problem. The worst three nations are China, Russia and us. But these are "export" emissions. We take no responsibility for the damage they cause the shared atmosphere once they leave the dock. We even send this crud out the door laced with petcoke. If you don't know what that is you should look it up.

The argument you make is the same we used to make for exporting asbestos to the Third World while the product was banned for use in Canada.

@Mound.
It's sad you should hed this article with a picture of the smogged Tower Bridge,
Not so long ago London was cleansed of such shite!

On a funny -ish note.
Back in those days of smog you could almost eat we frequented an English village pub and enjoyed it's after hours hospitality.
One of our group, a villager, took on the job of gravedigger which in those far off days was done by hand.
One year the smog took a terrible toll on the elderly and many died.
Their deaths coincided with the employment of the new gravedigger.
Village life, being what it is , the locals deemed the deaths an act of violence by the new gravedigger who was earning the grand sum of two pounds per grave!
Needless to say only his closest friends would sit with him in the pub..

How much air pollution is caused by the bitumen that is turned into asphalt and used to pave roads, and not burned? That is what it is wanted for.

TB, you've touched a nerve. For some months I was employed in the north, real Canada Shield country, as the town gravedigger. And, yes, it was done by hand.

The graveyard was about 10-15 miles out of town. The location was decided by the fact that it had enough soil to bury the dead. The rock table ran like a swimming pool bottom. At the shallow end you got perhaps 3.5 to 4 feet. At the deep end you were sure of a full 6 feet. The executives of the Hudson Bay Mining & Smelting got buried in the deep end - when and as they died. You would simply burn straw atop the soil, scrape out a few centimetres of dirt,and then repeat.

The indigent - often trappers who came into town for a bacchanal in mid-winter and froze to death when they were turfed out of their bar, they were housed in a predator-proof building. They went into the shallow end of the pool, post-thaw. Given the limited depth you really had to tamp down (compact) the dirt above their graves.

Because of issues with permafrost, the seasonal freeze and the thaw, graves had to be dug by hand. I have a few tales from that but I'll spare you for now.

Another, municipal, grave digger I knew was transferred to the crematorium.
He said his job was that of the D.J.

Disk Jockey I asked?
Yes says he; I put on the funeral music when the corpse goes into the fire

Life can be amusing.

I'm not quite sure why you are being so hostile to me. I do not believe I have ever been antagonistic towards you.

I am a Green supporter. However, since I live in a typically swing riding, I will vote strategically if I feel it necessary.

I am not a big fan of the pipelines. If First Nations approve, then fine. If not, then fine. They should be able to control what crosses their territory.