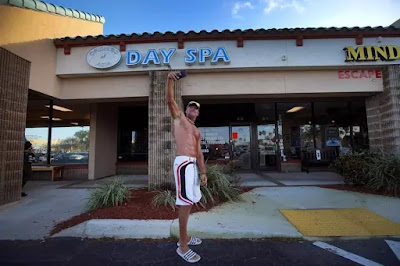 Heather Digby Parton writes of a new sex scandal that could embroil Donald Trump in a "new wave of sleaze and corruption."


It has seemed odd from the very beginning that New England Patriots owner Robert Kraft, a billionaire several times over, would patronize a massage parlor called the Orchids of Asia for a little quickie on his way to the AFC championship game. After all, men like Kraft can easily hire high end escorts and they often have mistresses on the side. Why go to a cheap strip mall?

But Kraft wasn't the only vastly wealthy john who got caught in the sting that has put him in the headlines. Private equity mogul John Childs and former Citigroup president John Havens were also arrested. There is obviously more to this sordid story of Chinese sex trafficking to come out in the days to come. With the recent re-evaluation of the extremely disturbing Jeffrey Epstein case from the previous decade, it seems that an illegal sex trade has been thriving in the ultra-rich enclaves of South Florida.

A woman named Cindy Yang founded the "day spa" where all these wealthy powerful men went to release their ... stress. Although Yang no longer owns the specific business where Kraft was videotaped receiving oral sex, it was known for offering the same "services" in her time. Her family still operates several similar enterprises that are also under suspicion for sex trafficking and prostitution. And wouldn't you know it, Yang is a big-time Republican who now owns a company that sells access to another wealthy and powerful man with a big presence in South Florida: the president of the United States.

The Miami Herald first reported that Yang had attended a Super Bowl gathering at Mar-a-Lago, and produced a selfie of Yang and President Trump posing together at the party. The Herald also published pictures of other events showing Yang and Trump's adult sons, along with a trio of Florida Republicans -- Sen. Rick Scott, Gov. Ron DeSantis and Rep. Matt Gaetz -- as well as onetime vice-presidential nominee Sarah Palin and Republican National Committee chair Ronna McDaniel.

According to the Herald, Yang had shown no interest in politics prior to 2016 -- she never even voted -- but "has now become a fixture at Republican political events up and down the East Coast." These gatherings all charge big donations to attend, although much of the money collected at Mar-a-Lago affairs goes straight into Trump family coffers to pay for the event. It's a tidy form of double dipping -- and, at least in general terms, not illegal.

Yang and her family have been generous to Trump and the GOP, giving more than $42,000 to the Super PAC Trump Victory and more than $16,000 to the Trump 2020 campaign in 2017 alone. As David Corn, Dan Friedman and Daniel Schulman of Mother Jones reported last Saturday, that's just the cost of doing business for Yang's company, which was started a year into Trump's presidency. Yang and her husband, Zubin Gong, started GY US Investments LLC, which they describe as an international consulting firm, in 2017. Displaying pictures of Mar-a-Lago, it openly markets access to Trump to Chinese business representatives.

For obvious reasons, national security experts were alarmed by this report. This startling combination of sex trafficking, prostitution and politicians presents a perfect opportunity for espionage and blackmail.

The plutocrats are now challenging aristocrats for debauchery.
With absolute power and therefore influence come moral standards unacceptable to ,gulp, commoner lifes!
Confident in their absolute 'financial' power , they conduct their lives with impunity from an electorate that envies their decadence.

A New York Court is reviewing the unsealing of all the court files on the Epstein Case.

Toss in Tucker Carlson’s “thoughts” on raping children and one starts to get the real meaning of conservatives “family values”.

But.. I do know when the line is crossed.. and I have astonishing skill at winnowing out Truth.. when my curiosity.. or far worse, my concern is tweeked by dark suspicion. Thus a Weinstein jerking onto convenient potted plants - that's a 'spectator' type event. So who was watching I ask? Not his male homies I can assure you. Epstein is another classic depravity run wild.. and way over any line. So dark & involving complicits (undoubably recorded) that he and his attorneys managed to coerce a grand failure and cover up of justice. Mind blowing! Trump and Dershowitz are in this up to their ears.. and so many others could be rolled up.

Ms Wang or Yang.. is classic enabling, useful idiot, operative. Donates diddly to Trump.. but brings the big dough suckholes from China plus more operatives.. and ultimately, they can operate within the privacy of Married Dik Largo.. golf n country club of the Free & the Smokin Hole of The Brave. Corruption comes in all flavors eh.. but bring in sexual harrasment, threats re job security, underage victims.. blackmail, coercion, scandal, payoffs, the Mob, money laundering, lobbying.. and now you're swimming among crocodiles.. and you'll do ANYTHING .. to get the crocs back in their cages.. lie, cheat, sellout.. and plunge in even deeper. I hope they fry.. I just don't care about the perps.. its the victims they screw over that concern me