These Guys Are All Unglued 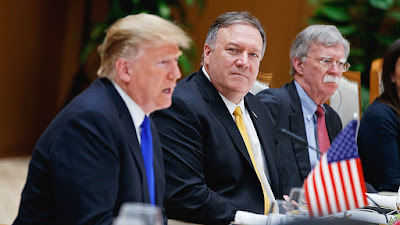 Even the secretary of state, Mike Pompeo who went on the Christian Broadcasting Network to opine that Donald Trump may be the new Esther sent by God to deliver Israel from the evil Iranians.

So, let me get this straight. God, the all seeing, all powerful, can send anyone he likes to save Israel - anyone he likes - and he chooses a complete asshole, a true mental defective.

Hmm, makes sense I suppose. No it doesn't. That doesn't make any sense. God must be out to screw over the Israelis.

Speaking of coming unglued. Trump today launched into an attack on special counsel Robert Mueller. After going through statistics of his win in 2016, Trump asked how many votes did Mueller get and why should anyone believe anything he said when did didn't win votes. b-a-t-s-h-i-t c-r-a-z-y
Posted by The Mound of Sound at 1:15 PM

It could be in the job specs. Or maybe God thinks only a mentally defective complete asshole would take it.

Trump and his inner circle realise that his future relies upon the fundamentalists and so they cater to their every whim.
The fundies are well financed and more importantly well organised.
Whilst I do not think Trump has a religious cell in his whole body ; he realises his ' followers' are his redemption!!
With Trump the idea of a USA theocracy is in plain sight.
At the end of the day it will not end well for anyone , American or not.
I wonder if the American way of life that promotes the fallacy of personal wealth,happiness aka greed is taken to it's limits with this religious lot, who wish for the end times where so few gain/collect the product produced by so many.
Yes, that's it; fuck you jack i'm taking everything.
Hallelujah.

Trailblazer, I think you would enjoy reading Kevin Phillips 2005 book, "American Theocracy." That was, of course, back in the Bush/Cheney era but Phillips, a "patrician" Republican insider, delivers insights that seem to explain a lot of what's happening today.

So many good books ( not the black one) so few time to enjoy due to walking the dog in the bush and working out at the gym!
I still have to read Naomi Klein's ,this changes everything to read plus Monbiot's one but last offering.
I am not going to let good reading and involvement spoil my enjoyment or should I say fulfillment of life.
If we cannot enjoy life we will not try and protect it!

The deepest foundational principle of the United Nations is that nobody is supposed to be able to take territory by armed force any more. Even the Americans don't normally break this, exactly. Like, they invaded Iraq and various other places--but they didn't change Iraq's borders or say that it was now part of the United States. Trump just took that final step, is trying to overturn that last, most basic feature of the United nations and international law.

President Trump is a bonafide guru.
And you know what gurus are to their followers. Remember the Rev. Moon?