"The Control Freak Who Lost Control" 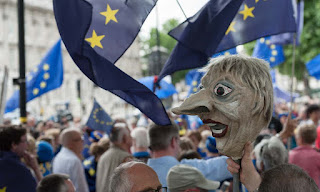 A "control freak who lost control." That is how the Observer's chief political correspondent sums up prime minister Theresa May who now finds herself neck deep in the quagmire known as Brexit.


The charge list against her is certainly a lengthy one. She triggered article 50 before her government had an agreed strategy for withdrawal and her senior team then wasted months squabbling with itself rather than advancing the negotiations with the EU. Ignoring advice to the contrary and without advance discussion with her cabinet, she made a prison for herself by laying down red lines that made the negotiations more difficult and set her up for a string of ignominious subsequent reversals. When she threw away her majority at an election she didn’t have to call, she carried on as if nothing had changed rather than trying to reach out to other parties to forge a broad consensus about a way forward. That made her the hostage of the Democratic Unionist party and the Brexit ultras on the right of her party. Mrs May has one quality that is of value in a political crisis. She has resilience. She lacks all the other ones, such as imagination, advocacy and agility.

True, all true, and yet not the whole truth. Any account of this nightmare that holds Mrs May solely culpable is not a complete explanation for how we got here. In a dark corner of what remains of its political brain, the Tory party knows that it is collectively guilty of driving the country it professes to love into this shaming mess. With a few prescient exceptions, the Conservatives all backed David Cameron when he promised a referendum on the cynical basis that he might not have to deliver it and with the arrogant assumption that, if he did have to, he would easily win it. Leading Tories fronted a Leave campaign that peddled fantasy promises that could never be realised. Since Mrs May came up with a deal that tried to reconcile withdrawal with realities, she has been repeatedly sabotaged by the political arsonists in Jacob Rees-Mogg’s gang. Her party has had several opportunities to remove Mrs May and it has always passed up the chance. This is not because there is any shortage of Tories who ache with ambition for the job; it is because no one has really wanted to take on the job while the Brexit torture endures. It has suited them all to keep Mrs May at Number 10 as their human sponge.


What about May's plan to bring her twice-rejected EU withdrawal agreement back for a "third time lucky" vote?


Incredible as it may seem, if Mrs May is defeated again, but gets closer to the winning post than before, we can’t be sure that she won’t go for a fourth attempt.

That could require the EU to agree to an emergency summit at which its leaders would be asked to give her time to try. Here we must register the ingloriously ironic consequence of all these Westminster games, especially those played by the ultras. Their astonishing achievement has been to make the EU more powerful in our national affairs than it has ever been. A delay to Brexit is entirely in the EU’s gift and requires, as I noted last week, the unanimous consent of every one of its members. Each state, large or small, can say no or demand something in return for a yes. It is a fairly safe assumption that the EU will grant a British request for an extension because its leaders don’t want a calamity crash-out Brexit. But the EU gets to dictate not only whether a supplicant Britain is granted a postponement but for how long and on what terms and conditions.