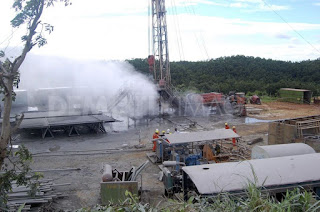 It's dead easy to make a case against high-carbon, toxin-laden bitumen, the stuff that Justin Trudeau, despite the science, wants to flood into world markets.

Natural gas, that's a tougher problem. It's colourless, odourless and, hence, out of mind for most of us.

There's a myth that natural gas is a clean fossil fuel. The story goes that gas produces a fraction of the emissions created by oil or coal. In fact, like most lies, there's a bed of truth in that claim. The volume of gas that does get consumed generates lower emissions than its equivalent in oil or coal. The lie is in the volume of gas that is lost to the atmosphere in the course of extraction, storage and transmission.

Natural gas, after all, is methane, a greenhouse gas far more destructive than CO2 from oil or coal. Studies have found that a lot of natural gas producers extract is in fact lost, so much that, per unit of end-user energy, it is actually dirtier than coal.

British Columbia's former Liberal premier, Christy Clark, vowed that BC would have a "world class," i.e. 'no leak' gas industry. What Christy Clark said, however, usually had only the flimsiest connection to truth.

If the natural gas cabal - such legendary Canadian stalwarts as Shell, Petronas, PetroChina, KOGAS and Mitsubishi, doing business as LNG Canada - are to be given the expansion go ahead, we need Ottawa to do what it never does. We need Ottawa to hold these foreign energy giants accountable for all the gas. Not just all the gas they eventually load aboard tankers but all the gas they release from the ground.

We need a zero tolerance policy that will impose truly punitive penalties for gas leakage and that will reward whistleblowers. There are environmentalists who already scout natural gas fracking sites with infra-red video cameras that capture the heat differential evidencing gas plumes from faulty equipment and slipshod operations.

LNG sites, from extraction to shipping terminal should be monitored with tamper-proof detection equipment that can detect leaks as they happen so that producers can be held accountable and compelled to repair the damage as quickly as possible.

Going ahead with "Ottawa Rules" is no longer acceptable. Who are you going to trust, Justin Trudeau? Really? Hey, get Christy on the line. Let her know her political career isn't over after all.
Posted by The Mound of Sound at 9:09 AM

If exporting LNG to other countries supposedly will reduce their GHG emissions by replacing coal, why not use it in BC to replace gasoline and diesel use?

A lot of the natural gas in BC needs to be fracked, which pollutes water and uses a lot of energy.

A recent article shows the problem of old well sites: