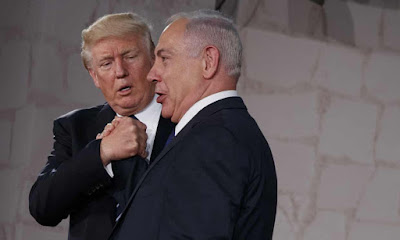 Donald Trump cares little for international law or the organizations that America itself forged to uphold the international order. Now he's showing his contempt for the community of nations by announcing the US will recognize Israeli sovereignty over the occupied Golan Heights, Syrian territory.


Previous US administrations have treated Golan Heights as occupied Syrian territory, in line with UN security council resolutions. Trump declared his break with that policy in a tweet.

He said: “After 52 years it is time for the United States to fully recognize Israel’s Sovereignty over the Golan Heights, which is of critical strategic and security importance to the State of Israel and Regional Stability!”

“At a time when Iran seeks to use Syria as a platform to destroy Israel, President Trump boldly recognizes Israeli sovereignty over the Golan Heights,” the Israeli prime minister wrote. “Thank you President Trump!”


Well, that should certainly help stabilize the region. Is Trump an evil person, one bent on inflicting havoc everywhere within his reach?
Posted by The Mound of Sound at 11:17 AM

Trump is the ultimate nihilist, Mound. His legacy will be chaos. His goal is to destroy everything he touches.

And he's doing a fine job of it, Owen. I have always sensed a deep malevolence lurking in that deranged son of a bitch.

"Russia (Crimea), China (Tibet) and Israel (West Bank)"
This grouping is only viable by a technicality.

The historical facts clearly exclude Russia.
1. Crimea was the very birthplace of Russia (Rus), before 1000 A.D.
2. Russians constituted main ethnic group essentially continuously there for the last 1000 years, even as Tatars invaded and occupied the area for a couple hundred years.
3. Crimea was a part of Russian Republic until it was arbitrarily assigned to Ukrainian Republic ~ 1954, by gasp, an Ukrainian fellow named Khrushchev.
4. After collapse of CCCP, there was a grassroots referendum in 1991
(remember, there was no influence of Russia then or a diabolical Putin) by the Crimean residents. Majority of Crimeans had opted to be a part of Russia again, but Ukraine, no wonder, said no.

Being a purveyor of truth might entail being called a troll, Russian agent, useful idiot, oh well... P.E.T. quote might come handy. Or that one by T.S.E.