The Kids Are Alright - Are You? 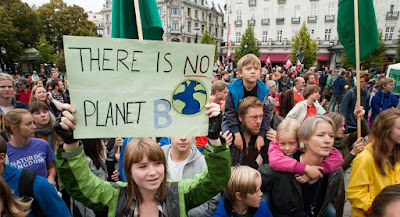 The kids, students waging a global climate strike, are alright. They know what's coming their way. They know the future we are bequeathing to them. It is what we have done, what we are still doing, that fills them with dread.

They're asking for your help. They need your help. Are you going to give them your help?

Praise for their courage means nothing of itself. Such sentiments are cheap and hollow, even hypocritical, if you continue to support governments and political parties bent on rapidly expanding the petro-economy. That encompasses Trudeau's Liberals, Scheer's Conservatives and, to an arguably lesser degree, Singh's New Democrats.

You can't play both sides, not on this one, not any longer. The perpetually optimistic Intergovernmental Panel on Climate Change, the IPCC, gives us just a dozen years to implement drastic cuts in greenhouse gas emissions - 50 per cent by 2030 - if we're to have any chance of averting runaway global warming and climate catastrophe. Those kids know that. Do you? They know what it means because that is their future.

Given the overwhelming scientific consensus and our understanding of what awaits you would imagine this would be our parties' overarching priority. Forget Andrew Scheer. Chuckles is a write-off.  What about Justin Trudeau? Do you think slashing greenhouse gases by half within twelve years is his priority? Do you imagine it's even on his radar. And, in the perilous state of the climate today, what does it mean when our prime minister continues to dole out billions of dollars every year in subsidies, grants, deferrals and other handouts to these fossil energy giants? Proportionally, Canada gives more handouts to the fossil energy industry than any country in the G7 - yes, including the United States.

Do you think Justin Trudeau would be driving through an expanded bitumen line to the wet coast if doing what those kids need done was even on his radar? His carbon cutting measures aren't even meeting Stephen Harper's laughable emissions targets. And, having chosen the "freedom from accountability" option by retaining first-past-the-post voting, neither of the major parties will have any incentive to change their petro-state policies.

There's no sitting this one out. You're either with those kids or you are against them and their right to a livable future.
Posted by The Mound of Sound at 1:41 PM

Again its who's right and who has responsibilities!
The prevailing attitude is we have the right to..this that or the other, with total disregard to having responsibilities to our offspring.

We really do have an odd attitude to our offspring.
We drive them to school instead of them walking or taking the bus.
We manage their lives to protect them from the realities of street life!
Off to hockey, off to soccer but dont play in the street!!

At the end of the day we commit our offspring , protected as they are, to a world full of the challenges of climate change that we have wilfully ignored.
The saddest thing is that most of these children are ignorant of the challenges as they have little attention span.

Oh TB, I think you misjudge them. But until one of them grows up and takes leadership of this country, they hooped!
I just hope the old planet will hang in there long enough to give them a chance.

@john, at least you gave it some thought!!

Now please consider this ,off subject!

The above is not news to me.
John Pilger has much to say about Australia's racism .
Pilger was thrown out of Australia by Rupert Murdoch in a similar way that Gwynne Dyer was thrown out, in Canada, by Conrad Black.

independent honest voices are hard to come by.

Some children are ignorant; some are paralyzed with fear, and some march. I've been to almost every Friday march in my area with my youngest, and she went to one without me, but I can't get the rest of my students to go - even when it's March Break and they won't actually miss school. They're not convinced it will have any affect on politicians; they're not convinced it's worth their while to get in trouble with their parents or other teachers, or they'd rather just click on a petition online. They're not convinced any parties will actually act on this. But last Friday's march saw hundreds, so it feels like, here, it's gaining some traction.

.. words and their meaning or intentions.. interest me

'all that wealth in the ground' - OK, in fairness its just a phrase used by a politician.. not an environmentalist or First Nations or a banker or a salmon advocate or a concerned teacher or a stockbroker or a respirologist or a six year old or a senior or .. well I could go on

''its the highest quality, cleanest, most ethical oil in the world' .. again, just words, prepared words from a partisan political animal of dubious prairie boy status. Again, its truly doubtful many students would agree. That same politician either truly believes or just lies his ass off publicly.. that Alberta dilbit, pumped across Canada to an Irving Refinery & Atlantic superport.. somehow represents 'Energy Security For Canadians' and could & should miraculously replace Saudi, US & Offshore Newfoundland oil. Keep in mind that 'oil' is not 'dilbit' or vice versa (even if that politician and many others tell you it is. Stick with the schoolkids facts, thanks. Try that fabricated premise out for a class project and you'd get an 'F')

This is an immediate era where youth is far more realistic and capable than their parents or their elders. They're going to create their own political parties.. and won't tolerate prehistoric or evangelical political posturing, corruption, old stock white snot a la Rex Murphy, Jason Kenney, Doug Ford or Gerald Butts, Charles McVety, Jenni Byrne or Christie Blatchford. Anyone or anything, impeding or not recognizing this new growth and awareness is deadweight. Did you catch the Aussie kid who egged the Queensland senator ?

The perfect area to be seeded and embedded by young generations is.. Environmentalism ! Protection of Spaceship Earth's ecology.. our atmosphere. I predicted long ago that 'fracking' frightened me more than the tar sands. I still feel the same way.. Can we please see more of this 'saving grace' .. and far less MainMedia stroking of pitiful corporate & evangelical captured partisans ?


Thanks, everyone. Here's what I want to get across. We are plagued with an inertia problem. Think of Canada as a body at rest, doing so very little to avert grievous climate change. We are currently falling behind in our efforts to meet Stephen Harper's emissions cuts promises. We have to get this ball moving or we fail.

We all know the challenge, 50 per cent by 2030. That will be disruptive and immensely difficult but it need not be beyond us. We at least must try.

Climate change policy has been and remains whatever our political parties chose to make of it. It is no party's priority - not the Conservatives, not the Liberals, not even the New Dems. We have to try to make it their priority.

How do we make this their priority? By denying them another false majority. These two parties cruise to majority power with 39 per cent of the vote. The runner up usually comes in at the mid-30s. Let's break up their palsy sinecure. Force them into minority government. Make them dependent on coalitions. Give the Greens the controlling vote.

Look, I would be joyful if we had a plan to do this over the next 20 years but we don't have that much time. Science tells us that, unless we move now, we may as well not move at all. And so that's on us, this time around.

I don't care so much about Andrew Scheer as I do about our young. I'm going to vote strategically against both parties.

As for Trudeau, his major promise is to phase out fossil fuel subsidies in 2025 (as if he'll still be in power then). You'll get no 50 per cent by 2030 promise out of him. How do I know? Because that would be evidenced by major policy changes right now and, beyond the expanded Trans Mountain pipeline, I know of none.

I'm fine, how about you?

7:02....Maybe their parents warned students not to do so.