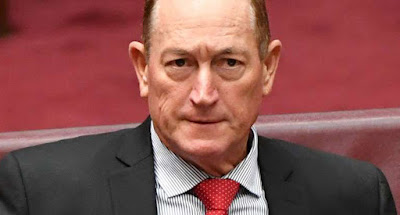 Whether it's Donald Trump's absolution of white nationalists or Andrew Scheer and Dave Tkachuk embracing them on the lawns of the Parliament buildings, the abject evil of the right wing is unmistakable.

Here's the latest. An Australian senator, Fraser Anning, has responded to the Christchurch massacres by blaming the carnage on the victims, Muslims.

Following the attack, which left 49 people dead at two mosques in Christchurch, Fraser Anning tweeted: “Does anyone still dispute the link between Muslim immigration and violence?”

In a statement shared by an Australian journalist on Twitter, the Queensland  senator also wrote: “As always, leftwing politicians and the media will rush to claim that the causes of today’s shootings lie with gun laws or those who hold nationalist views, but this is all cliched nonsense.

“The real cause of bloodshed on New Zealand streets today is the immigration program which allowed Muslim fanatics to migrate to New Zealand in the first place.”

Why do we let these people live among us?

A long, interesting read on the “Gateway” from conservative to mass shooter, including some possible solutions.


Thanks for the link. I wasn't familiar with the site but it is well written and thought provoking.