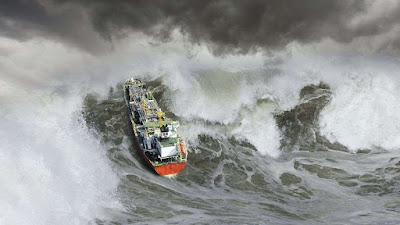 The beaches of the west coast are a big draw for tourists and locals alike. And every year there seems to be one or more news reports about rogue waves sweeping people far out to sea, often to their deaths.  You might want to keep that in mind next time you visit Tofino although fair warning is given by the feds on signs posted along Long Beach.

The good news. We're getting fewer rogue waves. The bad news. They're getting more extreme.


Scientists have, for the first time, used long-term data from a wide expanse of ocean to investigate how these rare, unexpected and hazardous ocean phenomena behave. Their findings are published in the journal Scientific Reports.

Waves are classed as 'rogue' when they are over twice the height of the average sea state around them. From trough to peak, past observations have put some at over 30 metres high. The fiercest are capable of damaging or sinking ships, can wound or kill crew members and on occasions have swept people off the shoreline and out to sea.

A team of engineers and oceanographers from the University of Southampton, together with researchers from The National Oceanography Centre (NOC), examined over 20 years of information (sourced between 1994-2016) from 15 buoys which provide surface data along the US western seaboard -- stretching from Seattle in the north, to San Diego in the south.

The scientists showed rogue waves are more prevalent and of greater severity in the winter months and, intriguingly, are happening with increasing frequency within calmer background seas.


A few years ago I was on the docks at Port Hardy at the northern end of Vancouver Island. It's a place where eco-kayakers like to launch. Down at the Coast Guard dock there was a large sign warning  that waves reaching 100 feet in height had been recorded on the northwest coast.

I stopped to talk to a couple of Coast Guard guys about their sign. They told me they chose a nice, big sign because they're the guys who have to go through those same waters to recover the bodies. Point taken.

Do you need hackers for hire? Do you need to keep an eye on your spouse by gaining access to their emails? As a parent do you want to know what your kids do on a daily basis on all social networks in others to make sure they're not getting into trouble? Whatever it is, Ranging from Bank Jobs, Flipping cash, Criminal records, removal of mugshots ,DMV, Taxes, crypto currency fraud investigation Name it, they can get the job done. Contact at www.premiumhacks.net Its that easy, try them out today.