Front Page of Polish Paper - 'How to Spot a Jew' 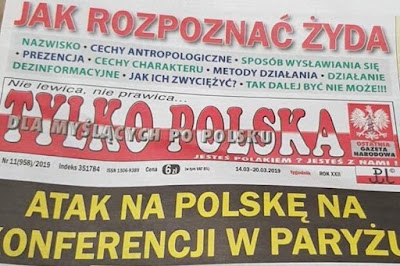 The right wing is alive and in charge in Poland today as that country joins Hungary and Italy in descending into illiberal democracy. It therefore should come as no great surprise that the latest edition of the Polish weekly, Only Poland, has on its front page an article entitled "How to Spot a Jew."

The list of supposedly Jewish traits was accompanied on the front page by a headline reading "Attack on Poland at a conference in Paris," a reference to a Holocaust conference held in Paris last month.

The article ran with a photo of Jan Gross, the Polish and Jewish Princeton scholar who wrote Neighbours: The Destruction of the Jewish Community in Jedwabne, Poland, the seminal text on a massacre of the Jewish people of Jedwabne by their non-Jewish neighbours during the Nazi occupation in Poland.

He later relented and said the information centre would request that Only Poland be removed from the set of periodicals delivered to the Parliament.

As I remember the stats claimed in a book that I read years ago (I’d guess Hilberg, but I’m not sure), the extermination of Jewish people in that country was over 90% achieved, while in Germany it was considerably less. Using the updated estimates provided at the site that follows with no discussion of factors and listing of a later work by Hilberg as one of its sources, the calculation works out to Poland at approximately 90% and Germany at 70%.


Poland has had a long and complex relationship with its Jewish population.

Your link Mound is self explanatory:
"For centuries, Poland was home to the largest and most significant Jewish community in the world. Poland was a principal center of Jewish culture, thanks to a long period of statutory religious tolerance and social autonomy...Poland was the most tolerant country in Europe...The country became a shelter for persecuted and expelled European Jewish communities and the home to the world's largest Jewish community of the time..."

There is no need to dwell on some idiot publishing extreme fringe "newspaper" which has a minimal readership.

@John B.
The link you have posted "somehow" omits 2.75 millions of ethnic Poles killed by Nazis.

"In addition to at least 7 million Jews killed, the Axis killed around 5.7 million non-Jewish Soviet citizens, around 3 million non-Jewish Soviet prisoners of war, 300,000 Serb citizens, around 250,000 people with disabilities living in institutions, around 300,000 Roma (Gypsies), and Jehovah's Witnesses, homosexuals, and German political opponents account for at least another 100,000 people."

Also, the exact numbers behind the story of "how many Jews were killed by Nazis" is irrelevant. It doesn't matter if the number is 3.5, 4, 6 or, unlikely 7, millions. Nazis had committed horrific crime of genocide. Period.

Work will set you free.

I think there are a lot of omissions in the paragraph you quoted besides the one you noted.

I agree that the exact numbers of murders aren’t relevant to the question of criminality.

If there may be other questions, I’m not framing them or drawing any conclusions.

@ John B
A reasonable person might also conclude that omission of Polish casualties in WW II (second highest after Soviets) smells fishy. Therefore, no wonder, that some Poles feel slandered that the certain acts of antisemitism are brought out of context of centuries of hospitality towards Jews. Hence the title of another article visible on that page: Poland attacked at Paris conference... (La nouvelle école polonaise d’histoire de la Shoah)
The fact that Poles lead in numbers among recipients of the award "Righteous Among the Nations" is also "somehow" little known. Not to mention that providing any help to a Jew during Nazi occupation of Poland meant nearly a certain death not only of the Polish individual involved, but often of his/her family.