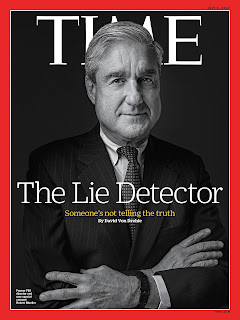 Special prosecutor Robert Mueller has wrapped up his investigation. CNN reports that Mueller has delivered his report into the 2016 election to attorney general William Barr.

Whether it will ever see the light of day remains an open question.

Meanwhile the House of Representatives various investigations into the president and his cronies continues.

CNN and other media outlets are reporting that Mueller will be bringing no further indictments which will come as a great relief to Uday and Qusay Trump, his daughter/bride, Imelda, and her wistful beloved, Jared (no, not the guy from Subway).
Posted by The Mound of Sound at 2:06 PM

"Truth will out," wrote the Bard centuries ago. Not so sure that is the case in our day and age, Mound.


We shall see, Lorne.

It will be interesting to see whether the report addresses both the Russian involvement in the 2016 elections and the issue of obstruction of justice.

Also of interest will be summaries of the statements given to Mueller's investigators by the Trump family, White House staffers, Deutsche Bank officials and Steve Bannon.

It seems unlikely that Mueller's indictments will end with Roger Stone. It is possible he may have recommended further charges to be laid at the discretion of the attorney general. No way to tell, not just yet.

We also don't know whether Mueller is leaving any parting gifts for Congress in his report, especially Adam Schiff and the House Intelligence Committee.