If It's Intrigue You Want, Ottawa Is Still Small Potatoes. 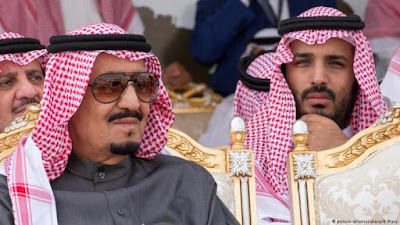 Rumours abound of plots to topple Justin Trudeau  and pluck some successor out of the ashes of an engulfed Liberal party in time to fight this fall's general election.  Relax, we don't move that fast.

If you're looking for intrigue, focus on the House of Saud where some form of regicide may be afoot as the feeble old king clashes with crown prince and reputed Kashoggi killer, Mohammad bin Salman. Hey, it wouldn't be the first time an impatient heir speeded up a succession.


The unease is said to have been building since the murder in Turkey of the dissident Saudi journalist Jamal Khashoggi, which the CIA has reportedly concluded was ordered by Prince Mohammed. However, these tensions increased dramatically in late February when the king, 83, visited Egypt and was warned by his advisers he was at risk of a potential move against him, according to a detailed account from a source.

His entourage was so alarmed at the possible threat to his authority that a new security team, comprised of more than 30 hand-picked loyalists from the interior ministry, was flown to Egypt to replace the existing team.

The move was made as part of a rapid response, and reflected concern that some of the original security staff might have been loyal to the prince, the source said.

The king’s advisers also dismissed Egyptian security personnel who were guarding him while he was in Egypt, the source added.

The friction in the father-son relationship was underlined, the source said, when the prince was not among those sent to welcome the king home.

While the old man wasn't looking:


The crown prince, who was designated “deputy king” during the Egypt trip, as is customary, signed off two major personnel changes while the king was away. They included the appointment of a female ambassador to the US, Princess Reema bint Bandar bin Sultan, and that of his full brother, Khalid bin Salman, to the ministry of defence.

The latter appointment has further centralised power in one branch of the ruling family.

...The Guardian has been told the king and his team learned about the reshuffle via television.

The king has been trying to repair some of the damage done to the kingdom by the murder in October of Khashoggi.

Supporters of the king have been pushing him to get more involved in decision-making, to prevent the crown prince from taking more power.

... “There are subtle but important signs of something amiss in the royal palace,” said Bruce Riedel, a director of the Brookings Intelligence Project and 30-year veteran of the CIA.

It might be a good idea for the old king to avoid unaccompanied trips down those massive palace staircases from here on in. Those flowing desert robes can be a real killer.

A very interesting development. Thanks, Mound.

I find it pleasant at times, Lorne, to escape the noise at home.