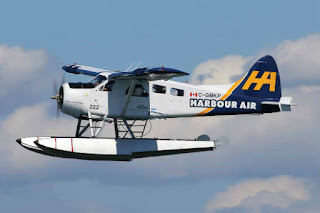 For decades they've been a staple of transportation on the west coast. Harbour Air, with its brightly painted fleet of DeHavilland Beavers, Otters and
Twin Otters seemed to be everywhere.  All on floats, naturally.

If you were in Vancouver and had a trial date in Victoria, you often bundled yourself into one of those Twin Otters for a quick hop across the Georgia Strait, inner harbour to inner harbour.

Now, Harbour Air is going a different route - electric. They're not scrapping the all-Canadian fleet either. They're switching the engines for electric motors.

Seaplane operator Harbour Air, which regularly shuttles B.C.'s political class to and from Victoria, is looking to become the first all-electric fleet of commercial planes in Canada – but the company head says passengers have nothing to fear.

Greg McDougall, founder of the company that bills itself as North America’s largest seaplane airline, said Monday that “I’ll be the first guy to fly one. I’ll be the test pilot of it.” He was referring to an electric-powered prototype the company will test within months as a prelude to electrifying the fleet within about two years.

By November, the company is planning to be testing a de Havilland Canada DHC 2 Beaver, a six-passenger aircraft equipped with an all-electric motor developed by magniX, a company based in Redmond, Wash. MagniX has been crafting the technology on the ground, but has yet to operate it in an aircraft.

The DH-C2 Beaver, first flown in the 50s, is a much sought after aircraft along the west coast from Alaska to California. A company outside Seattle restores them. The rights to the Beaver, Otter and Twin Otter were recently bought by Viking Air operating out of Victoria airport.

Electric, wow!! Could this be yet another lease on life for Canada's most famous airplanes?
Posted by The Mound of Sound at 7:21 AM


I think that, after 70 years in service, that original Beaver deserves a place of pride in the Canadian aviation museum in Ottawa. It would be devastating if that aircraft was lost.

It's remarkable how those vintage planes still fetch huge prices even before they're rebuilt. The going price for a 50s DHC-2, with Wasp Jr. engine appears to be $450,000 to $650,000 US. I wonder what DHC sold them for out of the shed at Downsview?

I'm really surprised you have not heard of electric airplanes. There was a program on CBC on the "Current" sometime ago ... I don't remember the details any more but.... /www.theatlantic.com/sponsored/thomson-reuters-why-2025-matters/electric-flight/208/

MagniX is an Australian outfit. Their expertise is designing low speed powerful electric motors that can swing a prop at the speed of old radials which were/are about ideal. This means they can dispense with a geared-down transmission from the usually higher-speed electric motors or what the PT6 gas turbine utilizes. Doing it all in a small package size is what distinguishes MagniX from the usual horde of blatherers because they have hardware that works.

They put in an overseas HQ near Boeing for semi-obvious reasons and since the Northwest and BC has a lot of hydropower. Washington State has actual manufacturing industry which would be helpful for MagniX - I'm hard put to think of anything much in the way of a BC manufacturing base except for a few innovative companies here and there.

Now all MagniX need is really decent batteries that literally don't weigh 1500 kgs or more for the energy equivalent of 10 or 15 gallons of gas. The car industry will help provide that as time goes by, but the spectre of the FAA being especially critical in giving air certification to a battery without mucho testing must now hang heavy.

After their recent public flagellation over delegating certification to Boeing on the 737 MAX series, the FAA are likely to overcompensate in the other direction. And the 787 debacle with lithium ion batteries catching fire that led to grounding of that fleet five years ago will be at the forefront of their minds.

But, best of luck to MagniX and those old de Havilland flying sheds!

Anon 2:09. No need to be surprised. I have followed the development of electric propulsion for light aviation for a good long while. Airbus has a demonstrator. Why would you think I would not know that?

BM, thanks for the information on MagniX. One of the most interesting parts of flying on a Beaver was the engine start and the sound of that big radial as it powered up for take off.

I have trouble imagining those Beavers with nothing but a high pitch whine. The prop might be noisier than the motor.

Still, on the harbour to harbour run, flying time is 30-35 minutes which should lend itself to electric propulsion.

.. surely a no-brainer .. especially for short run flights, at lesst initially. Would think for twin engine ops it will be wise to have split battery power so each prop (motor) has independent power source, yet can still be 'ganged' or shared as required. Expect it may allow exemption from urban flight curfews ! I still smile in surprise when a kid (or adult) passes me on a battery powered skateboard & I'm cruising aboard a leg powered hybrid mountain bike. We (the world) have to embrace localized, low footprint, solar, wind, tidal & water power.. and storage. We will certainly look at solar power shingling in the next couple of years and any other alternative home energy sources, like a wind driven rooftop energy collector (and any government incentives to do so !)