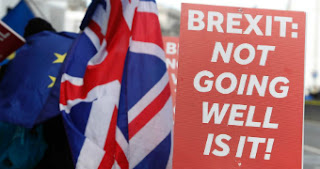 Britain's House of Commons has handed Theresa May's Brexit deal a third defeat. Parliament voted 344 to 286 to reject the withdrawal agreement for a third and, possibly, final time.

The European Commission weighed in quickly, pointing out that the buffer provisions in the withdrawal agreement will not be on the table in the event of a hard Brexit.
Posted by The Mound of Sound at 8:00 AM

What a fiasco! Crashing out with a no-deal Brexit is looking more and more likely. That'll make the jingos happy!

It is a total fiasco, Cap. By the sounds of it, May could now seek a second referendum, anything to avoid a general election. Would the EU give her a long extension to hold that referendum? I think they might but I wouldn't bet the farm on it.

I am so sick of people who think they are better and know better than anyone else. She should have called for an election a long time ago. Anyong

I've been listening to pundits and call-ins from the British public on LBC radio. After all of this - all of the votes and debates and negotiations - nothing has been achieved. No one knows what next week will hold, whether May will still be prime minister, whether Brussels will say "enough." The British people seem to be deeply frustrated and fed up. If there is an election the pundits think a lot of incumbents will be shown the door.

Funniest think about Brexit commentary, is it almost completely ignores the EU in any depth,

Thanks for the links Anon, TB. Much appreciated.