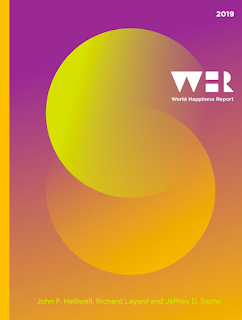 With all the chaos and havoc sweeping so many nations, today's release of the UN's World Happiness Report 2019 (pdf) went largely unnoticed. That's unfortunate because there is some thought provoking information in this report.

The Top Five - Finland, Denmark, Norway, Iceland and the Netherlands.  Coming in at 9th place, Canada.  Social democratic nations head the list as usual. No surprise there.

Then there's Trumpland, the purportedly United States of Americas.The most affluent society, the exclusive homeland of the "American Dream," comes in at 19th. The 2019 report focuses on the plight of (un)happiness in the US, referred to as a "mass-addiction society."


...the long-term rise in U.S. income per person has been accompanied by several trends adverse to SWB [subjective well being]: worsening health conditions for much of the population; declining social trust; and declining confidence in government. Whatever benefits in SWB might have accrued as the result of rising incomes seem to have been offset by these adverse trends.

...Consider the article in this year’s report by Prof. Jean Twenge (2019) on the rapid rise of adolescent depression, suicidal ideation, and self-harm after 2010, and a marked decline in SWB, apparently due in part to the astoundingly large amount of time that young people are spending on digital media: smartphones, videogames, computers, and the like. It’s plausible to describe a significant fraction of adolescents as addicted to screen time, and that is certainly how many young people themselves describe it. They regard their own heavy use of smartphones and other screens as a major problem to overcome, with 54% saying that they spend too much time on their devices (Jiang, 2018). The numbers cited by Twenge are indeed startling: “By 2017, the average 12th grader (17-18 years old) spent more than 6 hours a day of leisure time on just three digital media activities (internet, social media, and texting).”

...An addiction, generally speaking, is a behavior like substance abuse, excessive gambling, or excessive use of digital media, which individuals pursue compulsively in the face of adverse consequences known to the individual. My argument is that the U.S. is suffering an epidemic of addictions, and that these addictions are leaving a rising portion of American society unhappy and a rising number clinically depressed.

...The concept of addiction was originally applied by psychologists and public health specialists mainly or exclusively to substances such as tobacco, alcohol, marijuana, opioids (natural and synthetic), and other drugs. More recently, many psychologists have come to regard various behaviors as potential addictions as well. Such addictive behaviors include gambling; social media use, video gaming, shopping, consuming unhealthy foods, exercising, engaging in extreme sports, engaging in risky sexual behaviors, and others. Such behaviors may become compulsive, with individuals pursuing them to excess, despite the awareness of their harmful nature to the individuals themselves and to those around them (including family and friends).

...it’s worth emphasizing that if the U.S. is indeed suffering from an epidemic of addictions, the implications are crucial not only for public policy but also for the rethinking of economic science. The free-market theory taught in our universities holds that consumers know what’s best for them, with businesses efficiently and appropriately catering to those desires. The prevalence of addiction suggests a very different picture: that individuals may be lured into self-destructive behaviors, notably by businesses keen on boosting sales of their goods and services. Economists of course know of such risks, but drastically underestimate their prevalence and significance.

...The concept of addiction was originally applied by psychologists and public health specialists mainly or exclusively to substances such as tobacco, alcohol, marijuana, opioids (natural and synthetic), and other drugs.

I have a gut feeling that the use of marijuana for 'social' needs is going to cause many problems.
Recent reports on frequent use shows that can be quite psychotic .
Knowing a few people that are in the group of frequent users , I would say the report is likely true.
I also knew users of cocaine , for social use, who were not exactly pillars of society!


True enough, TB, but what do you say about this "epidemic of addictions" that goes well beyond substance abuse? Young people utterly obsessed with their "devices," nearly incapable of normal social interaction. Wanton consumption largely for the sake of consumption. How does that impact social cohesion?

I live on the south end of town.
The large shopping centre is at the north.
It amazes me the amount of peoples that make the 50 kilometer round trip to the north end to save $5.00.
At the same end of town I cannot understand those that shop at Costco to engage in making their meal of the day a round trip of the Costco samples handouts!!
The West Edmonton mall is a friggin tourist attraction !!
At the end of the day I am in awe at what enters the landfill!!!

The index's rankings are heavily influenced by the so-called dystopia factor.
Is this a new way of describing the fudge factor?