Can Theresa May Herd Westminster's Cats. It's Her Last Best Chance.

Theresa May has reached a "joint, legally binding agreement" with the European Union intended to quell dissent over Brexit in the House of Commons.

The focus is on the Northern Ireland "backstop." The commitment seems to provide that the backstop, if invoked by the EU, cannot be permanent. Here's a helpful explanation of the "backstop" from BBC:

The backstop is a position of last resort, to maintain an open border on the island of Ireland in the event that the UK leaves the EU without securing an all-encompassing deal.

...But, after Brexit, all that could change - the two parts of Ireland could be in different customs and regulatory regimes, which could mean products being checked at the border.

However, the UK's current red lines, which include leaving the customs union and the single market, make that very difficult.

The backstop is that safety net - an arrangement that will apply to the Irish border after Brexit, if a wider deal or technological solution cannot keep it as frictionless as it is today.

An agreement on the backstop is important because the EU won't agree to a transitional period and substantive trade talks until it is in place.

The UK and the EU said a backstop is needed - they both signed up to it in December 2017.

They also agreed on what it needs to achieve - maintaining cross-border cooperation, supporting the all-island economy and protecting the Good Friday peace agreement.

But beyond that there have been major differences between the two sides.

May calls it an "improved Brexit deal" but it's unclear that it will be enough to appease British MPs to support the Brexit withdrawal deal.

EU president Jean-Claude Juncker stressed that this is it, there'll be no third deal. He said the clarification agreement is intended to protect the people on "both sides of the channel" and to protect the peace in the "island of Ireland." He did not differentiate the Irish Republic from Northern Ireland.

The new understanding, Junker noted, is first subject to a positive vote in the UK House of Commons after which it will require ratification by the EU member states.

Watching the press conference it was apparent that the British prime minister was very defensive, perhaps contemplating the fight she expects tomorrow when the Commons votes on the Brexit withdrawal deal.

The British attorney general will be preparing a memorandum on the new agreement before the vote tomorrow. Ms. May, when asked what that memo would say, stressed that her A.G. is independent. Why didn't we think of that? 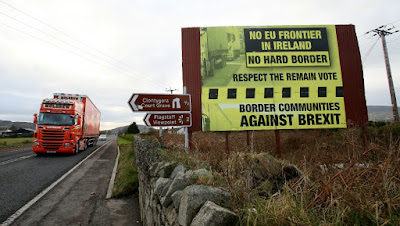 Update: I've been listening to excellent call-in radio channel, LBC London radio. Plenty of experts weighing in on the latest Junkers/May deal but the only thing that they're agreed on is that no one knows what any of this means for "the backstop."

A Politico reporter noted that Jean-Claude Juncker had no new authority from the EU council. He was working from the instructions he received last year so it's unlikely there's much substantive in today's deal.
Posted by The Mound of Sound at 3:56 PM

Tessa's being coy. Considering that in February she put the AG in charge of negotiating changes to the Northern Ireland backstop, I'm sure she has a very good idea what the memo will say.