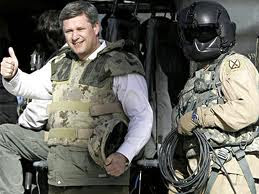 "We cannot pretend there is any more to do in Afghanistan."

That brief observation underlies the argument of former British Liberal Dem leader, Lord Ashdown, that it's time to pull his country's military forces out of Afghanistan, just as quickly as possible.

Calling the war in Afghanistan, "this awful mistake," Ashdown said the only reason remaining for fighting is to cover our withdrawal.

"It is not worth wasting one more life in Afghanistan. All that we can achieve has now been achieved. All that we might have achieved if we had done things differently, has been lost. The only rational policy now is to leave quickly, in good order and in the company of our allies. This is the only cause for which further lives should be risked."

And so, it seems, we may have at last reached the moment when the invincible military force (our side) realizes it has lost the war in which it never lost a battle.  We'll be agonizingly slow to admit it, careers, after all, are at stake, but we have lost in any case.

The ongoing war in Afghanistan is what routinely happens when a conventional military force, overwhelming in both numbers and firepower, loses to insurgents.   Because they can't defeat us on the battlefield we tend to keep on blasting away at them years after the issue is decided.

Just when was the issue decided?   Several years ago, that's when.  More than two years ago the Pentagon's own oracle, the RAND Corporation conducted an analysis that concluded our war in Afghanistan was irredeemably lost.

The report, "Victory Has a Thousand Fathers,"  identified positive and negative factors that created a litmus test to assess victory or defeat by counterinsurgent, or COIN, forces (our side).   The report was prepared for the then Secretary of Defence.

When the RAND folks ran the Afghan War through their test it came out a total loss, an utter waste.   Bear in mind that the RAND report was released to the public back in the summer of 2010.  Yet here we are nearing the end of 2012, talking about getting out of Afghanistan in 2014.

Here's the thing.   How many good people have we lost, how many innocent Afghans have we killed, since mid-2010?   How many good people will we lose, how many more Afghans will we kill by the time we all leave in 2014?   I wish we had those figures because they're very important.   They represent the number of people pointlessly killed due to the self-serving refusal of our political and military leadership to accept their failure at least as far back as mid-2010.  That is unless they can come up with some plausible justification for dragging out an unwinnable war by at least four (more like seven) years.

It's not that losing the Afghan War was inevitable.  That we'll never know.   What we should know, after all we owe that much to all the dead and their families, is that we made a few horrible choices that ensured we would wind up where we are today.
Posted by The Mound of Sound at 9:49 AM

Harper will not leave Afghanistan now or in 2014. He wanted to participate in Iraq war. More recently, in 2011, he entered into a defence treaty with Israel which includes the clause that “"a threat to Israel is a threat to Canada.". Probably he will be sending soldiers on Israel-Gaza border as there is a strong likelihood of war.

He wants to be a macho man.

Everyone and their dog knew. The Afghan war was an asinine war. The battles can be won, however, the war can't. The country would have to be pulverized into dry dust.

The minute all troops are pulled out of Afghanistan. They will go right back to, fighting and murdering each other. There will be tribe against tribe. Muslim against Muslim and ethnic cleansing. They are beheading children as punishment. Women are being murdered. Girls will not be permitted to go to school.

We should be expelling all Arab people, back to their own country's. They call us, dirty infidels and western women whores. We don't go around our country and kill them for insulting us. They murdered people, who had nothing to do with that video. Why do they come to this country, to live among we infidels and whores? I don't get it. The Iranian people in Toronto, defended those murderers. They should go back to their own country's. We let country's in, that believe in honor killings. Pakistan harbored Bin Laden. The Taliban train there. Now, they are teaching hate in their schools here in Canada.

Canadians have always accepted citizens of many different races. We accept their religions. However, those country's are barbaric. Their ways are not our ways. There is far too much of a difference. The gall to come to our country, and approving the murder of innocent people,is really overstepping our Canadian values.

We are beginning to want those people, to be sent back to their own country's. We are sick to death, of their violence, hate and intolerance.

Get our people out of their country's, AND KEEP THEM OUT!!!

Anon, you seem to suffer from Islamaphobia. U.S. has the highest rate of murders – 10, 000 a year. Where would you send all those kinds of Americans? Moreover, there are fanatics in every religion no matter what religion it is. We all are immigrants in Canada except for natives. Maybe we should all go to our countries of origin and give this land back to natives.

I have Muslim people as friends. I have nothing against their religion what-so-ever. When I go to their house, I cover my head out of respect for them. However, they say Muhammad was a gentle prophet and tolerant of others. That's fine with me.

But, when they have the gall to call us insulting names?? No, I don't want those people in this country. I don't want country's that believe in honor killings. How you can condone these people LeDaro, beats the hell out of me. Just you dare go to their country and call them names. You would be dead, the minute your words were out of your mouth. That's the difference.

In Afghanistan, those people are the troops friends by day, and kill them by night.

Terrorists have threatened Canada, more than once. They have also been, right in this country.

Now LeDaro. You sort out the good Arab people from the bad. Put your money where your mouth is. Make sure you tell us, which ones will blow up subways and such. Because, some of us really don't know, who they are. That's exactly how we were threatened. Passenger plane bombs and the like. Why are we so freaked by border and airline security?

Actually, Anon, we have law enforcement to do just that and they've done a fine job of it. We've had terrorists operating out in Canada before. Back then they were called Fenians. Did we chuck out all the Irish-Canadians who sympathized with them?

Give it a rest.

Anon, what about FLQ who killed British ambassador? Trudeau had to invoke War-measures Act. It was like a Martial Law.