A Glimpse Into ISDS and Free Trade Deals that Aren't 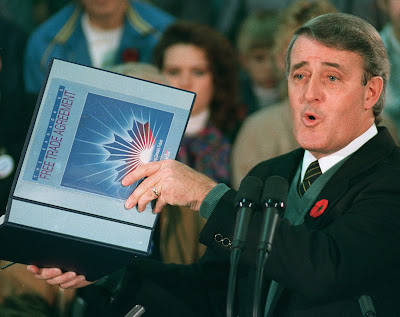 There's a powerful and growing argument that globalization has failed - long ago - and that the free trade deals it spawned evidence that the concept has been hijacked with what was supposed to be a win-win arrangement (more jobs, good wages) transformed into one in which only a very few win and many now lose.

Free trade deals that were supposed to benefit nations and their populations now instead serve the interests of transnational corporations and those who run and own them.

Free trade, as it was sold to unwitting publics around the world, was supposed to be based on reciprocity. You got as good as you gave only there was supposed to be a lot more giving and a lot more getting and so everyone would prosper and be happy. That was the idea - until corporate giants spotted their opportunity to turn the idea to their service.

There is no reciprocity between governments and corporations in free trade deals. Rights and powers, incidents of state sovereignty, are basically surrendered in the name of facilitating trade.

What governments seem to ignore is what my dad taught me many years ago - rights and freedoms have real value, often a monetary value, that is especially tangible to those who would deprive us of them. Whether it's yielding the right to levy tariffs or duties or giving up the power to enact legislation vital to protecting national interests in areas such as environmental protection, that's a one way street.

So how do corporations extract value out of these sovereign powers laid at their feet? They have a tool. It's called ISDS, a term that's embedded in these free trade agreements. ISDS, Investor State Dispute Settlement, the term itself is a misnomer. It could more aptly be named IDS, Investor Dispute Settlement. It provides rules by which investors, the corporate side, can hold governments and their peoples to account if they do things that somehow impede trade - ridiculous things like legislating carbon emission cuts or clean water or wage requirements, that sort of thing.

The Guardian offers an instructive lesson in ISDS that arose out of the EU-US free trade deal, TTIP, and one of the world's fossil energy giants, Chevron. To the American oil giant, ISDS was more than a way to protect its investment. It was a handy tool to intimidate governments and their regulators. Who needs to punch if the constant threat will suffice to make the other side cower? (Warning: the next sentence is extremely awkward)

Environmentalists have long-warned that the Transatlantic Trade and Investment Partnership’s (TTIP) investor state dispute settlement (ISDS) commercial courts risk a regulatory chill, with governments backing away from measures limiting fossil fuel extraction for fear of lawsuits. But this is the first time that a major oil firm has corroborated their fears.

Details of the US oil company’s lobby drive in Brussels two years ago emerged as EU and US negotiators sat down in New York this week to begin a 13th round of talks aimed at securing the TTIP deal. France and Germany have both previously said they want the access to ISDS removed from TTIP.
“ISDS has only been used once by Chevron, in its litigation against Ecuador,” say the minutes of a meeting in April 2014 between unnamed Chevron executives and European commission officials, which the Guardian obtained under access to documents laws. “Yet, Chevron argues that the mere existence of ISDS is important as it acts as a deterrent.”

Chevron has explored for shale gas in Romania and Poland in recent years, though it has since withdrawn the shale projects in both countries. The company is currently pursuing a $9.5bn suit against Ecuador’s government at an ISDS court in the Hague, for allowing indigenous people to sue the firm - for the same amount of money - over allegedly illegal practices dating back more than 20 years.

“This document [the minutes] shows that the power to use investment arbitration as a shackle on environmental regulations is a key reason why multinationals like Chevron defend them,” said Cecilia Olivet, a researcher at the Transnational Institute and member of the presidential commission auditing Ecuador’s bilateral investment treaties.

“Pressure on public budgets means the mere threat of a multi-million dollar international arbitration lawsuit can make governments reluctant to implement social or environmental protection measures that could affect the interests of foreign investors.”

New Zealand postponed plans to introduce stricter rules on cigarette labelling in 2013 after lawsuits by Philip Morris International against Uruguay and Australia in ISDS tribunals.

The city of Hamburg agreed to relax clean water rules in 2011 after an arbitration investment suit by Vattenfall, while Canada reversed a ban on the toxic chemical MMT and agreed a $13m payment in 1998, as a result of an ISDS claim by Ethyl.

Indonesia also granted the mining company Newmont an exemption to laws requiring local processing of raw materials before export in 2014, to settle an ISDS arbitration suit.

Peter Kirby, a partner in the Canadian law firm Fasken Martineau described ISDS tribunals as: “a lobbying tool in the sense that you can go in and say, ‘OK, if you do this, we will be suing you for compensation.’ It does change behaviour in certain cases.”

A powerful yet almost never mentioned reality that argues against any trade deal with ISDS trip wires is the duration of these deals and the rapid changes that our world is undergoing - economically, environmentally and geopolitically. With all this uncertainty, what risks do governments expose their people to in a 30-year deal that is premised on a state of affairs that is entirely unknown, uncertain? How much more deeply entrenched will corporate power become as these changes overtake us? How will the already inadequate balance between corporatism and state sovereignty deteriorate over the term of a 30-year ironclad deal? Are we and our children being sold into a commercial form of indentured servitude? Where are the protections? Where are the escape clauses? Is everybody asleep in the locomotive?
Posted by The Mound of Sound at 10:21 AM

The rich are looking after their own and they could care less about the rest of us.

Governments like Canada that go along with these deals, including the ISDS clause should be charged with treason. Romania and Poland, actually all of the eastern block countries when the Soviet Union fell rejoiced that they now could rid of the government planning backed by communism. The US Imperialists and the E.U. were there to assist these countries in setting up financial planning. What they didn't know then, but they do now is that they replaced authoritarian communist government planning with authoritarian Neoliberal financial planning.
Still serfs, but now it is American Imperialism and Global Neoliberals who are the masters and they have no problem exercising violence when you don't do what they want.Is this really what Trudeau wants for Canada?