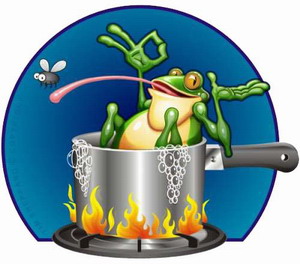 Sorry, I didn't mean to wake you from your dreams of petro-paradise but this is getting tough to ignore.

Earth is on a roll.

Adding "yet another month to a new mountain chain of extreme global temperature peaks," March 2016 was the warmest since at least 1891, according to the Japan Meteorological Agency (JMA).

Not only that, but, as February did, March broke the previous record by the greatest margin yet seen for any month. Compared to the 20th-century average, March was 1.07°C hotter across the globe, according to the JMA figures, while February was 1.04°C higher.

If April also sets a monthly record—and there's no reason to think it won't—"the Earth will have had an astonishing 12 month string of record-shattering months," writes Andrew Freedman for Mashable.

This is information that's useful to recall when Trudeau and Notley get to talking about new pipelines and "tidewater." That really is "boiling frog" talk you're hearing from those two. Really. It really is. Boiling Frog talk. Getting the message?

The warming is compounding. I think we have already hit the point of no return. This 1.5 business is a fools dream.

The earth has just seen a couple of years when economies grew while CO2 fell. Smoke means money is failed thinking. Canada's economy is doing better than expected despite the oil patch debacle. Maybe leaving it in the ground is not a bad idea after all.

Off topic says Anyong but....you may not know this.....A large diesel oil spill has been spotted in English Bay in Vancouver, BC. This spill comes only about a year after the last spill in the Bay, after which all levels of Government promised an improved response. Officials say this spill had no environmental impact.
But this sure looks like an "impact" to us.