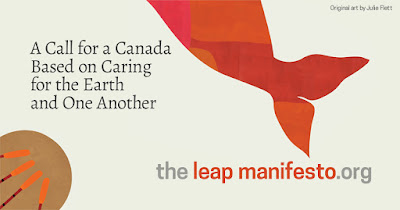 Mulcair couldn't "get her done" but that doesn't mean the ghost of Jack Layton has been exorcised from the NDP tent. Could a bitter civil war be in the offing?

Even the urbane Robin Sears, who's an old New Democrat backroom guy, associated the Leapers with the party's ancient struggles with Trotskyites and the Waffle movement. The Leapers, Sears said, were just the latest incarnation of the NDP's "Birkenstock Left." They posed a "fateful choice" for the NDP:

"It can once again indulge its tribal myths about public ownership and an Arctic nation kept affluent and warmed by thousands of acres of solar panels. Or it can pick up the baton that Jack Layton bequeathed to Thomas Mulcair, that of a serious national progressive party disciplined enough to be rewarded with power.

"If it chooses the Jeremy Corbyn, Bernie Sanders, Socialist Caucus book of children's political fairy tales, they will have decisively buried that dream, consigned its achievement to a distant future generation."

Lawrence Martin harmonized with Sears like Simon with Garfunkel: "Under the leadership of Jack Layton and Tom Mulcair, it was moving into the mainstream. Now, with the rejection of Mr. Mulcair at the Edmonton convention and the rise of the Leapers, it is returning to the days of dogma -- days when it didn't even pretend to be a serious contender for the prize of governance."

L. Ian MacDonald said the party had been "hijacked by the loony left."

B.C.'s own Les Leyne quoted provincial NDP leader John Horgan: "We won't be proceeding under any Leap Manifesto... under my leadership."

And Tasha Kheiriddin of iPolitics speculated that the "hard-left" Leap Manifesto would win support from Quebec separatists, driving other Quebecers into the arms of the Trudeau Liberals in 2019.

It's hard to imagine how the Leap brigade and the centrist forces within the NDP can ever reconcile. Too much bitterness. There's probably going to have to be a winner and a loser and a betting man would not be putting the rent money on Leap.

Must sound like music to the ears of Elizabeth May.
Posted by The Mound of Sound at 2:41 PM

At least Walkom is not singing from the same neocon songbook. He doesn't see anything radical in LEAP.

When I first read the Leap Manifesto, the first thing that struck me is that it is not a policy proposal, (as it claims to be,) but a speech. Given who the authors are, and what their publicly expressed opinions about how the party handled the election are, that speech takes on a rather definite lecturing tone.

Long on polemic, and short on real detail (beyond proposing a hard end to the petroleum industry,) the document is best described as a call to arms, meant to organize a coup within the party. There are already rumours as to who the tyrant (in the original Greek sense of the word,) will be - Avi Lewis.

Despite the fact that I really do want to see, (and think that Canada needs) the NDP to move to the political left, the way that I want the NDP to do that is to put forth a series of specific, detailed proposals, that can each be debated, (and modified, if necessary,) based on their individual merit.

The Leap Manifesto, contrary to this, is clearly meant to sharply divide the party into Believers and Heretics, no further discussion allowed.

There is a lot of vague language, and the lack of detail seems deliberate. Letting supporters choose to see what they want to see in the document is a remarkably effective way to rally the troops. Unfortunately, it also means that the critics can also put their own spin on things, and the only response is to call them Heretics.

It's not about whether the document is "radical" or "reasonable" - it's deliberately written so that any given reader can interpret it as being as radical, or reasonable as they want.

The problem, rather, is that it represents an approach to politics that should be seen as troubling for a party that tries to portray itself as member driven.

Fortunately, it's also not a winning strategy, should the Leapers win the day.

I have to agree, Mark. Leap is not a policy paper despite Lewis' claim to the contrary.

What it has become is a live grenade. Now we have the BC NDP leader, Horgan, joining Notley and the NB NDP leader in rejecting it - no debate necessary.

Another huge problem is that Leap is detached from public opinion. The public support that would be required to implement the fossil fuel policy simply has not been achieved nor is any party working to develop that support. This is one of those major issues that requires social licence and yet Leap is silent on this issue.

I fear Klein and Lewis have come at this unprepared, capable of little more than sowing havoc in their party. I read Klein's "This Changes Everything" and was stunned to find it utterly underwhelming.