Now Trudeau Has Amnesty Snapping at His Heels


Political Capital 101. If you're going to defend something as odious as the Saudi death wagon deal, bullshit excuses only make everything worse.

First, Trudeau, dismissed them as "jeeps." Given that Canadian soldiers have been waging war with them for more than a decade that was an incredibly stupid thing for Justin Trudeau to say about Canadian-built light armoured fighting vehicles, the LAV.

Then he sent Dion to CBC stumble through a litany of unconvincing excuses including "oh, we would never do it again." Screw off, Steffie.

With every gaffe, more attention focused on just what we're selling and just who is buying, and in the harsh light of day support for the deal plummeted to barely 20%.

Harper might have started it but Trudeau owns it today -  lock, stock and two smoking barrels. Not for nothing has Alison coined it Trudeau's "Sunni Ways."

Now Trudeau has Amnesty International on his back.

The U.S. State Department earlier this week released reports reviewing the human rights practices in nearly every country on the continent.

"The most widespread and dramatic violations in 2015 were those in the Middle East, where the confluence of terrorism and the Syrian conflict caused enormous suffering," said U.S. Secretary of State John Kerry during a news conference in Washington, D.C., on Wednesday.

The U.S. country report on Saudi Arabia noted that women were allowed to vote and run as candidates for the first time in 2015, but the 52-page report was filled with examples of dramatic human rights violations.

The U.S. report also made note of the air and ground operations conducted by the Saudi-led coalition to counter the Houthi rebellion in Yemen, as well as reports by human rights groups of multiple civilian deaths.

On Thursday, Amnesty International called out Canadian officials on the apparent conflict.

"Saudi Arabia has an alarming record when it comes to human rights, one that affects the lives of thousands of people, including prisoners of conscience in Saudi Arabia and civilians in Yemen," [Amnesty spokesman John Tackaberry] said. "To supply arms to Saudi Arabia with full knowledge of this record is to risk being an accomplice to these violations." 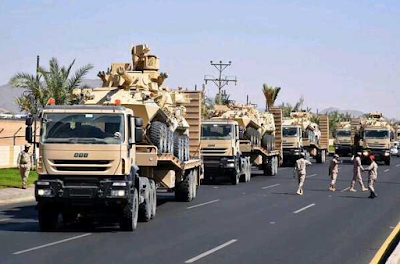 This one is going to haunt Justin Trudeau even after the last of those damned death wagons has been winched aboard a freighter and sent off to sea. You'll notice that Justin's "Jeeps" wind up loaded for bear. Even Canadian army LAVs don't have that kind of firepower.
Posted by The Mound of Sound at 12:52 PM

George Orwell who called political speech and writing the defense of the indefensible, Mound. he certainly got that right, eh?

P.S. I really have to start doing a better job of proofreading.

General Dynamics is a US company Mound. The 3k jobs are somewhat important, but the 15B profit is more important. Also, Washington is going to want this deal to go through. Canada is just being a proxy for Washington. Human rights aside, saying no to Washington is not, for Trudeau, an option. American Imperialism rears it's ugly head again.The criticism of selling weapons to a human rights violator is of course valid. My concern however is that we seem to have a PM who cannot say no to the Washington even when it means doing a deal with a barbaric, violator of human rights like Saudi Arabia. The Washington dinner for Trudeau is reaping its rewards for Washington.

Yes, he certainly did that, Lorne.


@ Pamela - it's time that Canadians understood the true nature of becoming indentured to America, a conscript in Washington's Foreign Legion. We're overdue for an adult discussion of what role we want our country to play in this increasingly troubled world.

I agree, but I know of no one in the MSM nor any public figure who has the guts to expose the role we're really playing as the US's number one trading partner and ally.