And From the Dissolving Planet File 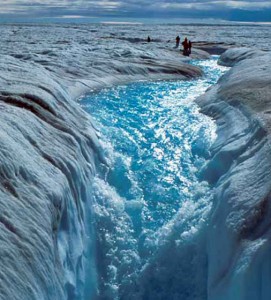 Don't usually associate the University of Calgary with climate change research but...

A new study led by U of C's Cryosphere Climate Research Group finds that Arctic sea ice is disappearing about 25 per cent faster than we had thought.

The salt content of snow covering the ice has tricked the European Space Agency satellite CryoSat-2 into concluding that ice is thicker than it actually is, and this likely means the first ice-free Arctic summer will come years earlier than once thought, said U of C geography professor John Yackel.

“We were a little bit surprised by that number — we knew the effect was there but in our minds it was maybe five to 10 per cent,” he said.

There’s no question the ice’s retreat is a result of human-induced climate change, with the CyroSat-2 calculating a 17 per cent reduction in Arctic ice thickness per decade since 1979. That’s considered a rapid retreat, but “it’s probably a little bit higher than that,” said Yackel.

So, yet again, our understanding of climate change, its early-onset impacts and the progress of natural feedback loops (shh - runaway global warming) has been shown unduly optimistic.

So, what have we learned over the last week or two.  Well, Britain's Tory government has announced that much of the UK's farmland is just 30 to 40 years away from "the fundamental eradication of soil fertility."

“We have encouraged a type of farming which has damaged the earth,” [Michael] Gove told the parliamentary launch of the Sustainable Soils Alliance (SSA). “Countries can withstand coups d’état, wars and conflict, even leaving the EU, but no country can withstand the loss of its soil and fertility.

Okay, what else?  On Monday there was a new report on the troubling pace of ocean acidification. It's already messing up marine life. Scientists predict Atlantic cod in the Baltic and Barents sea could be a quarter of their current size by 2100.

Ocean acidification is another effect of pouring carbon dioxide into the atmosphere, as the gas dissolves in seawater to produce weak carbonic acid. Since the industrial revolution, the average pH of the ocean has been found to have fallen from 8.2 to 8.1, which may seem small but corresponds to an increase in acidity of about 26%. Measures to reduce the amount of carbon dioxide reaching the atmosphere can help to slow down this process, but only measures that actively remove carbon already in the atmosphere will halt it, because of the huge stock of carbon already in the air from the burning of fossil fuels.

So, we've got faster disappearing sea ice, the approaching loss of farmland even in the UK, ocean acidification, what else? Oh yeah, a German report on a massive and rapid decline in flying insect populations.  A 75 per cent decline over the past 25 years.  That seems even faster than the global depopulation of animal life, terrestrial and aquatic.

That sort of wraps up the big environmental developments of the past two weeks. The research that once trickled in now resembles if not a tsunami at least a storm surge. The research shows this is coming on from all directions and we're still understating the pace, degree and severity of the changes underway.  Other than that, Mrs. Lincoln, how did you like the play?

On that British Tory government: Prince Chuck could have told them that. In fact, I'm pretty sure prince Chuck DID tell them that, repeatedly. That's why the press considered him a loony.


Yes, I believe you're right, PLG. Always good to hear your take.

Very significant Information for us, I have think the representation of this Information is actually superb one. This is my first visit to your site. IQ Testing