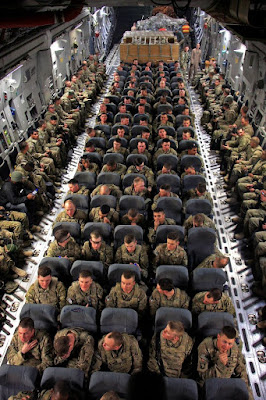 Since 9/11 America's adventures in the Middle East have run up astonishing costs.  As of this time last year the total of all direct and indirect costs was estimated at $4.8 trillion. That's bound to be well past five trillion now.

Just what has America got for its money, its five trillion? It has certainly guaranteed it will have a front row seat to more of the same for the next 15, 20, perhaps even 30 years.  I'm not making that up. There are US commanders who see the Afghan war, the one that kicked off this regional madness, continuing for at least another 15-years. And the greater Sunni versus Shiite civil war is looming.

America's defence industry, why do they call it "defence" anyway, is doing very nicely. Raytheon has no end of contracts for new missiles. Lockheed has massaged its F-35 through. It's now just too big to kill.  Congress ordered the Pentagon to buy so many M-1 tanks that the Army is awash in them and can't develop the new tank it thinks is needed to counter the latest from America's adversaries.  FUBAR.

The American military behemoth is beginning to look like a gored beast. It certainly isn't winning any grand victories. If you want won wars you have to go back to Grenada and Panama and that's way, way back, over a quarter century.

But the Land of Everyday Low Taxes can't get distracted by these military imbroglios. It must get back to the business of defunding the federal government.

It's amazing but, after WWII, every administration, Democrat and Republican, managed to reduce federal debt as a percentage of GDP. Even during Vietnam with half a million US soldiers deployed in southeast Asia. Still paid down the debt.

When Ronald Reagan turfed Jimmy Carter out of the White House, the United States was the world's largest creditor nation. The world was in hock to the US of A. That gave America incredible power that, coupled with owning the world's reserve currency, the greenback, left the American position unassailable.

It was the era of Voodoo economics, the "supply side" theory of "trickle down" prosperity. Less was more, ad infinitum. It was also the era of neoliberalism, the collective brain fart of Thatcher, Reagan and Mulroney. America still clings to most of that bullshit, including the trickle down nonsense.

Since Reagan only one president managed to balance the nation's budget and reduce the national debt, Bill Clinton. Even that was mainly sleight of hand. The powerful Dot.Com bubble created massive notional wealth, imaginary wealth, a bit of which was real enough to flow into government coffers.  A lot of scoundrels made a ton of money in that bubble, including the government of the United States. Sorry, suckas.

Clinton handed the reins to Bush and Cheney and what did they do? They ran up the deficit, started two endless foreign wars, and cut taxes like the reckless little motherfuckers they were.  Cheney encountered resistance from Bush to a second round of tax cuts for the rich. Bush was worried about the deficit. Cheney put his president's mind to rest by noting that Reagan had showed that deficits don't matter. He said that. Deficits don't matter. And so Bush funded two foreign wars and two massive tax cuts all on borrowed money.

Congress played its part by enabling the spread of Casino Capitalism, allowing major banks to become betting houses. The chips would be residential real estate, liar loans, dodgy mortages and bundled securities and, in reverting to pre-Depression speculation, the US government and its financial sector ushered in the Great Recession of 2007-2008, the very Republican mess that Obama inherited the day he took office.

Obama also inherited the wars in the Middle East. He wanted out but that wasn't really in the cards. It looked like they were getting out but these adventures often wind up sucking you right back in. That's why they're called quagmires.

Now it's Trump's turn. They've got a guy with the commercial morality of a cat burglar and seemingly endless ties to dirty Russian money. And what's he want to do? Tax cuts, the biggest and "most beautiful" tax cuts America has ever seen. He was hoping to cover part of the tab by kicking a few dozen million of the poorest and most vulnerable off health care. That didn't work, not yet anyway, so he's going to have to finance the tax cuts with more borrowings.

Meanwhile Trump wants to attack Iran so badly his gums are bleeding. And that other little upstart in North Korea. And maybe the Chinese with their sandbar islands in the South and East China seas. And Trump believes that restoring America's military prowess is a matter of buying more and better guns as though America's miserable showing since 9/11 has been caused by a lack of guns. Tillerson is right. Trump is a "fucking moron."

And the gorilla in the room? That five trillion dollar butcher's bill for these unwinnable, unstopable wars in the Middle East? As Uri Friedman argued in The Atlantic last year in a piece titled, "Fighting Terrorism With a Credit Card," interest payments on US war debt could come to exceed the actual cost of the combat itself.

Past U.S. wars were largely “pay as you go” affairs for which the government raised taxes, slashed non-military spending, borrowed money from the American public by selling war bonds, or chose some combination of these and other options, according to Neta Crawford, the author of the study and a political scientist at Boston University. The George W. Bush administration, by contrast, cut taxes in 2003, engaged in deficit spending after using up a budget surplus that it inherited from the Clinton administration, and sold only a small number of war bonds. (The Obama administration has taken a similar approach, though taxes have risen for people earning more than $400,000.)

U.S. leaders are essentially bankrolling the wars with debt, in the form of purchases of U.S. Treasury bonds by U.S.-based entities like pension funds and state and local governments, and by countries like China and Japan. This unusual arrangement, Crawford argues, has influenced how these wars have been conducted and perceived by the public.
...

Harvard’s Linda Bilmes has noted that this approach—financing a war entirely with debt while cutting taxes—is unprecedented in U.S. history, with the only comparable case occurring during the Revolutionary War, when the U.S. colonies borrowed money from France and the Netherlands. After that conflict, U.S. Treasury Secretary Alexander Hamilton justified the loans as “the price of liberty” for a cash-strapped country confronting an emergency. But he also said it was vital to promptly repay the debt and assert America’s creditworthiness—a goal the young nation soon achieved. “[I]t is easy to conceive how immensely the expences of a nation, in a course of time, will be augmented by an unsound state of the public credit,” Hamilton wrote.
...

Sometimes—when, for instance, buying a house or paying for a child’s education—taking on debt is a prudent investment, she added. But that doesn’t apply to the way America has funded its fight against terrorism: “It’s like my car: I need it to get to work. I might get into a little bit of debt to have this thing. But it’s as if I keep borrowing and borrowing and borrowing, and I never pay, so I never really get rid of that debt. And then I’m going to pass that debt on to my child. What we’ve done with this deficit financing is we’ve passed the debt on to future generations.”

The government is acting as if this debt can be passed on indefinitely, she said, but it could actually constrain the government in the future from providing basic services and responding to emergencies. As Alan Viard, an economist who served in the Bush administration, once put it, “When you borrow to pay for the war, you feel it less. But if you do borrow, it may be future needs you’re sacrificing. There’s always a sacrifice.”

Founding father, Hamilton, was right. It's a terrible idea to borrow to fight wars but, if you must, it is essential that you repay that unique debt as quickly as possible to restore your creditworthiness.

Unfortunately America is no longer run on honest vision and prudence. It's leadership and their sponsors are as into Casino Capitalism as they were before the Great Recession. It's just emerging in different forms but it's potentially just as dangerous to the wellbeing of the American state and the future of generations to come.

It's pretty obvious that the guy getting in behind the wheel is blind stinking drunk. So why are we so happy to jump into the back seat?

War spending frequently leads to the collapse of empires. Tbe only wonder is tbat the US empire hasn't collapsed already. I doubt it will survive the Trump administration.

"The government is acting as if this debt can be passed on indefinitely, she said, but it could actually constrain the government in the future from providing basic services..."

All part of the neoliberal long-term plan, Mound.


I think the Chinese will go to great lengths to prevent outright collapse, Cap. It is in Beijing's interests to engineer a steady but measured decline leading to a soft landing for the US, a new reserve currency and a dominant China resting, in part, on the foundation of what had been America's empire.


Having read Krugman's Friday column, Lorne, it seems more than possible this is following an ideological play book. Krugman fears the next Fed Chair will be an Ayn Rand acolyte who may help usher in a neo-feudal order. This is fast becoming a non-stop shit show.