Is Trump Nearing Melt Down? 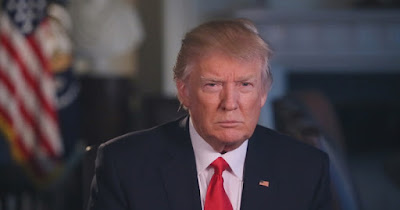 According to The Washington Post and other US mainstream media, America's man/baby president is in a very dark emotional state.  His legislative agenda (to the extent there ever was one) is in shambles. He's losing his grip on the Republican Congressional caucus. He senses, quite rightly, that the media are out to get him, deservedly so. He who obsesses about ratings knows his numbers are in the cellar, more than two thirds of his countrymen now seeing Trump as unfit for office. Special counsel Mueller is closing in on Trump and his cohorts.

Paranoia is said to be the traveling companion of narcissism and Trump is awash in both. Now White House aides describe him as "brooding" and volatile.

In a matter of days, Trump has torched bridges all around him, nearly imploded an informal deal with Democrats to protect young undocumented immigrants brought to the country as children, and plunged himself into the culture wars on issues ranging from birth control to the national anthem.

In doing so, Trump is laboring to solidify his standing with his populist base and return to the comforts of his campaign — especially after the embarrassing defeat of Sen. Luther Strange in last month’s Alabama GOP special election, despite the president’s trip there to campaign with the senator.

Sen. Bob Corker’s brutal assessment of Trump’s fitness for office — warning that the president’s reckless behavior could launch the nation “on the path to World War III” — also hit like a thunderclap inside the White House, where aides feared possible ripple effects among other Republicans on Capitol Hill.
...

Trump in recent days has shown flashes of fury and left his aides, including White House chief of staff John F. Kelly, scrambling to manage his outbursts. He has been frustrated in particular with Secretary of State Rex Tillerson, who was reported last week to have earlier called the president a “moron.” Trump’s Sunday morning Twitter tirade against Corker caught staffers by surprise, although the president had been brooding over the senator’s comment a few days earlier about Trump’s “chaos” endangering the nation.

One Trump confidant likened the president to a whistling teapot, saying that when he does not blow off steam, he can turn into a pressure cooker and explode. “I think we are in pressure cooker territory,” said this person, who spoke on the condition of anonymity to talk candidly.

This portrait of the president increasingly isolated in the capital city is based on interviews with 18 White House officials, outside advisers and other Trump associates.
...

One Trump loyalist — noting that Corker has many more friends in the Senate than Trump does — said the rift could dash chances for a tax law overhaul or other meaningful legislation. “His presidency could be doomed,” said this person, who spoke on the condition of anonymity so as not to alienate the president or his staff.

“We have been watching the slow-motion breakup of the Republican Party, and Trump is doing what he can to speed it up,” said Patrick Caddell, a veteran pollster who has worked with Stephen K. Bannon, Trump’s former chief strategist, who now runs Breitbart News, a conservative website.

Further signs of the breakdown in the relationship between Congressional Republicans and this president have emerged from the unwillingness of Senators and Representatives to side with Trump against their colleague, Bob Corker.

A day after Corker (R-Tenn.) and Trump traded some of the sharpest intraparty blows of the year, Republican senators were mostly quiet. Those who did speak did so obliquely — by praising Corker generally but steering clear of inserting themselves directly into the brutal clash.

“Senator Corker is a valuable member of the Senate Republican caucus and he’s also on the Budget Committee and a particularly important player as we move to the floor on the budget next week,” said Majority Leader Mitch McConnell (R-Ky.), walking a line that other Republican senators followed throughout the day. McConnell’s remarks were first reported by the Associated Press and confirmed by his office.
...

The reaction highlighted the broader strategy Capitol Hill Republicans have adopted when it comes to the president’s tendency to wage rhetorical war against their own or incite other controversies: Don’t engage in public no matter how anxious they may be in private.

That approach grows riskier with each passing crisis — exposing congressional Republicans to culpability for the actions, some with potentially grave global consequences, of an unpredictable and contentious president.

“They should prepare to be the ones who shoulder the blame if Trump does something truly, absolutely catastrophic,” said Rick Wilson, a Republican strategist and vocal Trump critic. He later added: “They forgot what moral courage looks like.”

That really sums it up, doesn't it, Mound.

In order to forget, they'd first have to know what it looks like. Moral courage involves more than words. When those Republican senators actually do something to remove Trump, I'll happily credit them with moral courage.

While some within the Republican Party would like to get rid of Trump I see no signs that they are ready to ditch the systems that put him there, allegiance to big money donors, Reagan's voodoo economics, big oil, the Electoral College, denial of human caused global warming, whack-a-mole military escapades, etc. The list goes on and on.

Does a moron know what a moron is?

Anonymous Anonymous asked, "Does a moron know what a moron is?"


I see this guy as a menace to us all. He's profoundly unstable. I cannot recall anyone as shamelessly narcissistic. It deprives him of any ability to accept criticism, even the most constructive. He takes everything as a personal rebuke although, in fairness, most of it is just that. He is sleep deprived and, quite possibly, in some early-onset stage of dementia.

Trump has no presidential skills. He brought to the White House the only game he knows, the game he used to screw banks, investors and creditors, including the trades that built his empire. Now he's finding out that doesn't translate into a viable model of governance and yet it's all he knows. It's small wonder he's constantly pouting, even brooding, to the extent where his chief of staff has to manage his tantrums and mood swings, a cross between a nanny and a psychiatrist without prescription privileges. Who wouldn't like to see gen. Kelly start feeding this loon, the one with the nuclear launch codes, a steady diet of anti-psychotics. Lithium might be the answer.

Funny watching all the black-pilled cattle jumping up and down in their pens.

Hysterical on spiked prole-feed begging the Deep State for more!

Another heaping dose of assholery from Anon.