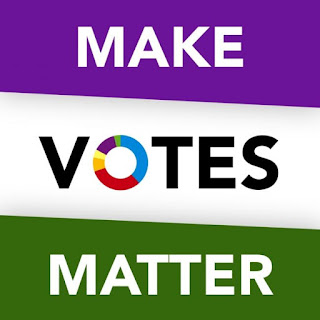 That's how I'll be voting this November when the BC government holds a referendum on electoral reform. And then it will be time for all of us to turn on Justin Trudeau and tell him to pull his thumb out.

The Globe's Gary Mason previews what we can expect, especially from the now "barely clinging to power" NDP.


Those resistant to change offer mostly flimsy arguments to bolster their positions. Why fix what’s not broken, they insist. (Except the current system is broken). Or the detractors will trot out Italy, and the chaos witnessed in its parliament because of PR. Yes, Italian politics boasts many parties and is filled with much emotion and drama, but that’s Italy, and that’s its people, not necessarily the voting system it uses. For the most part, countries using PR are governed extremely well, in some cases far better than those using a majority-rules structure.

In British Columbia, you have die-hard New Democrats arguing against electoral reform because they believe it’s not in the party’s best interests because it will forever prevent the NDP from forming a majority government. And you have die-hard BC Liberals making precisely the same argument about their party’s electoral chances under PR. Their positions are not based on what’s best for democracy, but what’s best for their parties.

And if that isn’t a good reason for changing the status quo, I don’t know what is.

BC’s NDP government is inching closer to unveiling what the question (or questions) on the mail-in referendum ballot this November will be. Once that is settled, the two sides of this fight will engage in what is likely to be a loud and nasty dialogue. It always is when power is at stake.

Of course, British Columbians have voted on electoral reform twice before. In 2005, 58 per cent marked their ballots in favour; unfortunately the threshold set by the Liberal government of the day was 60 per cent. Four years later, there was less enthusiasm for change, with only 39 per cent voting in favour of it. This time around, the NDP has set the bar for reform at 50 per cent plus one, which scares those who want to keep things as they are.

I’m not sure there is a huge appetite to upgrade the current system. That might change once the Yes and No sides launch their respective campaigns, and rancour ensues.
Posted by The Mound of Sound at 9:12 AM

Whenever I approach the voting issue I get so bogged down in details that I forget why I try. First past the post is easy to understand and would be a good system if everyone voted and if vested interests weren't trying to manipulate the outcome. Those vested interests would still be a problem in any system.

My favorite alternative is a constitutional change that requires 50 + 1% of eligible votes to form a government. Such a requirement would force coalitions. It has the side benefit in that I can understand it.

I hope people vote Yes in the upcoming referendum. Even though I'm sure I'll have many qualms about what exactly the NDP come up with for the new voting system, our parliamentary democracy (and court system) ensures that if it goes terribly wrong, the government of the day can by a simple vote in the legislature bring back fptp.

If you're interested in the idea of electoral reform at the federal level, successful experiments at the provincial level would go a long way towards making that a reality.


Chris, I've got qualms too but I can't see our democracy continuing when 39% of voters can elect massive majorities. I fear that Horgan's crew will try to defeat the referendum because, when it comes down to it, the NDP and the Liberals are really in it for themselves, not the public.