This Seems to Explain a Lot 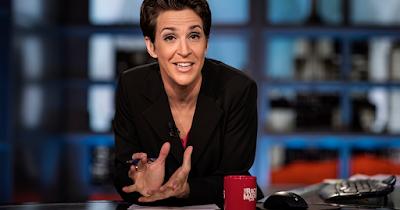 I have my own reservations about Rachel Maddow. Sometimes she gets just a little carried away which is never a good thing if you're chasing witches. That's why I rarely post clips from her show. This time, her show from February 28th, is, IMHO, really important.

Why? Most of us, the writer included, are following the unfolding Trump scandal from a distance. It's just too depressing to delve too deeply. I confess, I'm as guilty as most on this one.

We hear or read a lot about obstruction of justice and other high crimes and misdemeanors that are being attributed to Donald Trump, his family, and their minions. At times it may not seem to make a lot of sense.

As a grizzled barrister who once boasted of a reasonably enviable success record, I had trouble making sense of an event aboard Air Force One when Trump and his intimates conjured up a cover story about the meeting at Trump Towers involving Donald Trump Jr., Paul Manafort, Jared Kushner and a gaggle of well-placed Russians.

So Team Trump, the Donald included, conjured up a bullshit cover story for the meeting, claiming it was about adoption of Russian orphans, so what? Politicians, including our own, lie as though it were a virtue. I never understood the "big deal" until I watched a segment from Maddow's show on February 28th.

Now I get it and "it" goes a long way to explain this week's Trump meltdown in the Oval Office. What do you think?

If Maddow's take on this is correct, and I cannot imagine it isn't, then Trump is a cornered rat. Sure it's vermin but it's also extremely dangerous.

Author Michael Wolffe in his tell-all West Wing book, "Fire and Fury" relates the lengths to which former Trump confidante, Steve Bannon, went to quarantine himself from the participants in this effort. There were certain people he would not be seen with. If they came into the Oval Office he either retreated to a corner or simply left. It appears this played a role in Bannon's attack on key White House figures as traitors committing treasonous acts against the United States.

This is fascinating stuff until you realize that Mueller's investigators must have been alive to this months ago. Then you have to ask why none of these issues have turned up in grand jury indictments to date. Nothing, nada, but why? The safe money bet is that Mueller has many more indictments working their way through his mill.
Posted by The Mound of Sound at 12:52 AM

This is Donald Trump, exactly how and what he is, and look at the kind of people he attracts. Its been a free for all.. and they're all in the public trough, wallowing and splashing. Now a stone cold investigator named Mueller and his team is wading in to start dragging many of them out. And we can see already, that they probably have the whole chronological flow chart with names and data up on a secure wall. Obstruction of Justice is a biggie. So is Lying to FBI as is Perjury. Money Laundering huge. Mail Fraud, Conspiracy.. I think the story will end up some day.. some imprisoned. Some comletely disgraced. Some going broke. And one resigning to avoid impeachment. This is a vast entwined clusterfluck of monumental proportions. An astonishing number of ignorant greedy folks who define the terms I started this comment with.. The scene aboard Air Force One will end up as an anchor scene in movies.. a la All The Presidents Men.. it will probably end up in many books. It will also end up presented as evidence in Courts of Law.

"Most of us, the writer included, are following the unfolding Trump scandal from a distance. It's just too depressing to delve too deeply. I confess, I'm as guilty as most on this one."
LOL. Really, Mound, based on the frequency of your posts on the subject, I think you are kidding yourself.
Don't hold your breath. Many predicted tRump would not last a year.
Charging and convicting a President is an entirely political process and the GOP ain't going after their golden goose.
A massive democratic victory this year (ya, right) would change things but then they'd be wise to drag the impeachment or whatever out to the 2020 election cycle otherwise Pence gets a chance.

the reality is the staff surrounding the great orange ape are well beyond their competency level, they basically are walmart staff that have been promoted to run Harrods----their level of sophistication is minimal.
so the idiots say stuff to lawyers, like those Emails will disappear---having no idea what they just committed ---to a person who has some professional integrity left(not much but at least enough that they dont want to end up in jail:P)
as for trump every situation he has ever encountered, the lawyers always have solutions ---this time he is being abandoned by lawyers-- like rats leaving a sinking ship, as they know its hopeless.

A Republican operative, Eliot Cohen, was asked to work for Trump. After talking to Trump's wunderkind, he wrote a piece in the Washington Post telling his fellow Republicans to stay far away from Trumpville. It sounds like Bannon learned that lesson early.