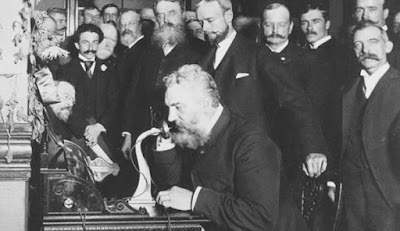 A Canadian tax adjudicator thinks Alexander Graham Bell's claim to have invented the telephone is a load of hooey.

Descendants of Alexander Graham Bell have accused a Canadian tax adjudicator of bias after he questioned, during a dispute over a hefty property tax assessment, the legitimacy of Bell’s claim to have invented the telephone.

Bell, who was born in Edinburgh but spent much of his life in Canada, is widely credited with patenting the first telephone in 1876. He later founded the telecommunications company AT&T.

But that history has been challenged in a tax dispute over Bell’s sprawling estate of Beinn Bhreagh Hall in the province of Nova Scotia.

According to provincial authorities, the property is worth C$885,000 – a figure Bell’s descendants say is almost twice what they think it’s worth. They argue that because the 125-year-old site is a heritage property, mandatory maintenance costs diminish its market value.

The row deepened last year when tax adjudicator Raffi Balmanoukian issued a written decision in the case, saying: “I confess I am not a fan of [Bell’s] claim to fame.”

Balmanoukian noted that an Italian American inventor filed a caveat – the precursor to a patent – for a similar device in 1871, five years before Bell. “If Antonio Meucci had renewed his patent office caveat for his ‘sound telegraph’ this appeal may not have been before me today,” he wrote.

This is not the first time Bell’s work has been the subject of dispute: in 2002, the US House of Representatives passed a resolution recognizing Meucci’s contributions to the development of the telephone. Canada’s parliament retaliated quickly, unanimously passing a motion affirming Bell as the inventor of the device.

“This is not to say that for the appellant all is lost for all time,” wrote Balmanoukian in his original decision. “I indulge myself by saying, ‘Please hang up and try your call again.’”

And Edison didn’t invent the light bulb. Two Canadians did. He just fixed it.


I believe Edison figured out that you needed at least a partial vacuum in a bulb to prevent combustion of the filament, right? Was that it?

WTF? Politicians now decide who invented what? Has the truth really devolved to this?

There has always been a gap between the person who made a discovery and the person that won the patent. Edison made few of the discoveries he patented. He had a staff of talented researchers suppressed by the equivalent of non disclosure sagreements.

Speaking of Edison, Rumley, if you're ever near Detroit check out the Henry Ford Museum in Dearborn and Ford's "Greenfield Village." The village is made up of a variety of 18th and 19th century buildings Ford bought and had relocated to Dearborn. There is a row of slave cottages he brought from some southern plantation. There is the Wright brothers original bicycle shop with a Wright flyer under construction in the back room. You will also find Thomas Edison's two-storey laboratory. Ford had these buildings dismantled, transported and then faithfully reassembled on his site. Ford and Edison were friends and so Edison came out to inspect and approve Ford's work. While there he sat in his old chair. When Edison left, Ford had workers affix it to the spot where Thomas Edison last sat in it.