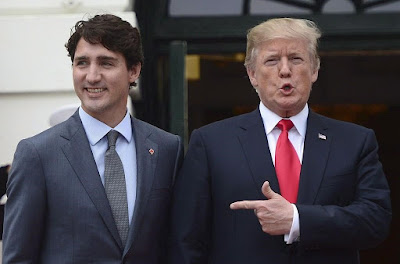 We all loved Michael Harris when he would sink his teeth into Stephen Harper. Now some of us don't love him quite so much when he calls Justin Trudeau out for the same things.

Among those "things" are the Kinder Morgan pipeline and Trudeau's betrayal of the people of British Columbia.  Harris writes that Trudeau is giving BC a northern 'Standing Rock.'

A day after that, the Mounties moved in and arrested an unlikely group of villains — Indigenous leaders and “water protectors.” These are middle-aged moms and housewives worried about native rights and the environment, and the odd university student.

Back in 2015, while Trudeau was campaigning for the top job, he said governments may grant permits, but only local communities can give permission. On this, as in many other issues, the ‘Great Promiser’ changes his tune more times than a DJ at a wedding reception.

The fact is, the prime minister doesn’t have the support of the Musqueam, Squamish or Tsleil-Waututh nations. Nor does he have the support of elements of the Secwepemc nation, who do not want pipelines across their vast, unceded territories in British Columbia.

As reported in The Guardian, when the original Trans Mountain project was built in 1951, the Secwepemc nation couldn’t oppose because they were firmly under the thumb of the white establishment. First Nations people could neither organize politically, nor hire a lawyer.

But elements of the First Nations are not the only ones against Kinder Morgan. The project is also opposed by the province of British Columbia, the cities of Vancouver, Burnaby, Victoria, and 19 other municipalities, as well as 23,000 coast protectors, and a quarter of a million petitioners. That’s a lot of local rejection by anyone’s measure.

But as the late, great Stephen Hawking, scientist extraordinaire and master spirit of reason, might have put it, what is a politician’s fate compared to the destiny of an entire planet?

That is the saddest part of Trudeau’s stand on this project. No matter how he twists the truth, the science is not with him on this desperate role of the dice to save Notley’s political bacon. In fact, the science is not on anyone’s side, as internationally acclaimed Canadian scientist David Schindler wrote last week in the Vancouver Sun.

This is how complete the government’s ignorance is on the question of the impact of a major spill of diluted bitumen on the B.C. coast.

According to Schindler, no one really knows if the stuff would sink or float. No one knows the actual effect on marine life. No one knows how long it would hang around in the event of a major spill. There is a reason. No one has conducted the ocean research. ...

Trudeau is resolving doubt in favour of a potentially catastrophic product for B.C.’s coast line, marine life and rivers. Because there is no indisputable evidence that a spill of bitumen would spell disaster for the environment, the prime minister is proceeding as if it is safe to do so. It is the oldest con of all.

The "precautionary principle" which is the law of Canada, upheld by the Federal Court of Canada and the Supreme Court of Canada, puts the onus on those forcing this pipeline on us to prove it safe. Trudeau and Notley flout that law and, instead, threaten British Columbia when its premier seeks to do the very research and testing they've shirked.

Here you can listen to Environment minister Catherine McKenna explain why we need the pipeline to stop Global Warming or something like that. I sort of got lost in the wool.

.. I have yet to get a coherent, brief response, explaining how
loading dilbit supertankers bound for Asia or south to feed
pipelines to the Gulf Coast refineries
I can't believe they will go Panama Canal)

(yes yes, the vaunted royalties, Alberta Bound eh
the Economy and Jobs Jobs Jobs.. and no we will never see
any meaningful environmental cleanup
and the buffalo will not roam
the TFW's yes.. and thus come the pipeline 'spills')

I won't even visit how dilbit behaves in water
I believe the battleground is terrestial..
Stop it there..

To answer your question, Mound, permit me go to the always-reliable Shakespeare canon, in this instance, Hamlet, Act 4, Scene 3, whereby Claudius shares his understanding of the masses:

Yet must not we put the strong law on him.
He’s loved of the distracted multitude,
Who like not in their judgment, but their eyes.
And where ’tis so, th' offender’s scourge is weighed,
But never the offense.

I hope this helps clarify things.

The Trump Doctrine is ' energy dominance'. The US will outproduce and outsell all other oil producing nations. If this actually happens, expect oil prices to crash as production is sped up to compete in a race to the bottom.

Alberta's filthy, expensive tar will fall farther than any other product. Noone who is going broke can afford to build a pipeline. Investors will see Alberta as a worse choice than Enron.

Ya, the tar sands get blessed by we coddled Canadians
While we torture the timber and ruin a good scene
Yes we'll dig for the tar till the land is forsaken
And then use all the water, to make gasoline.

Ya can't have too much John Prine.

Jim and Jesse sang Paradise to crowds of rednecks at Bluegrass concerts. Few realised it was a radical lefty protest song.

Junior has done the research: it's called: PAYOLA!

He's not turning Canada into a Chinese resource colony for nothing! He's not turning trillions of barrels of Albertan bitumen into atmo carbon for nothing - while gouging people for useless, ineffectual carbon taxes. He's doing it so he can live the high life! Going around the world, getting paid big speaking fees to do what he does best: stand up in front of a room full of people and look and sound pretty.

(And I used to think the Queen of England was our figure-head of state! Ha ha. Canada is a funny country!!)

I truly loved McKenna's idea that the coast will be safer because of the increased response available.
a) How about putting that extra protection in now - it's more than needed.
b) How about we relocate some crack houses to either side of the minister's abode. Sure it feels more dangerous, but it'll be safer due to the increased police presence.

Also, when was/is that ending of subsidies to fossil fuel providers supposed to happen?


Not a solitary Liberal rising to the challenge. Hmm.