And the Arsehole of the Day Award Goes to - Deron Bilous 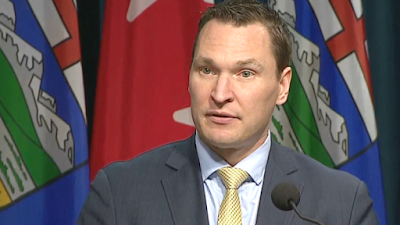 Minister Bilous wins the Arsehole of the Day Award for referring to his fellow NDP legislators in British Columbia as "a bunch of shitheads" during a meeting with municipal politicians in Edmonton.

"Quite frankly, ideally, we need to be more collaborative with the provinces on either side of us, although B.C. is being a bunch of s--theads," Bilous said, according to a report in the Edmonton Journal. "But we're going to do what we can to get the pipeline built."

The report said members of the audience laughed and applauded loudly.

It's curious that the more British Columbia wants straight answers about this hazmat crud Alberta wants to transport across and out of BC, the more Rachel's Notley Crew turn apoplectic.

This is not a new controversy. The devastation of bitumen spills has been going on for at least 15-years. Alberta and Ottawa who, under the tenets of the Precautionary Principle, bear the burden of proving their dilbit pipeline/supertanker initiative as safe as they claim it to be have done nothing (that we know of) to research the issue. The Royal Society of Canada says they've not answered the fundamental safety questions. Trudeau's own Environment Canada says exactly the same. They've had at least 15 years to do this and yet they come to the table empty-handed.

There's plenty of reason to suspect they know there's nothing safe about this dilbit business and they're keeping that knowledge to themselves. After all, why should they now get indignant when British Columbia wants to get those essential answers? The onus is on them and they aren't meeting it.

'Scuse us for being concerned about a massive increase in toxic spill risk on our coast.

If Horgan was the NDP Alberta premier and Notley was the NDP BC premier they would have exactly the opposite position to what they now take.

Are there any Jeremy Corbyns (ie politicians that have been consistent for decades regardless of their popularity) in Canada?
(Tommy Douglas RIP)

I think we last saw that type with David Lewis and Ed Broadbent, NPoV.