Tillerson Out. Fired With All the Class Donald Trump Could Muster 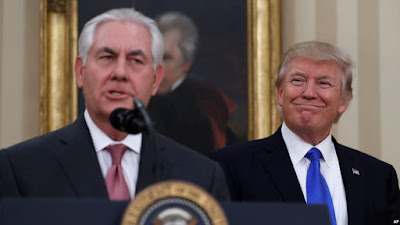 In the United States, the Secretary of State is sort of a big deal. He/she is in the president's inner circle, the "long pants" team. They also become a household name. I'll bet you can name quite a few. Start with Thomas Jefferson. He held the job first. Don't forget Madelaine, Condoleeza or Hillary. Colin, Henry and John Kerry. They usually seem to last one term, maybe less.

Then there's Rex Tillerson, the Trump administration's former secretary of state. Rex, who never denied having called Trump a "f#@king moron" at a staff meeting, went the way of so many Trump aides this morning. The Cheeto Benito fired Tillerson's ass right out the door and, naturally, he did it in a tweet.

Here's the thing. The world new before Tillerson did that is unless Tillerson was cruising Twitter. The State Department wasn't impressed:

The exit was not a voluntary one, the State Department confirmed in a startling statement Tuesday. Tillerson "did not speak to the President and is unaware of the reason" for his firing, Under Secretary of State Steve Goldstein said in a statement Tuesday morning, "but he is grateful for the opportunity to serve." A senior State Department official told NBC that Tillerson found out about his firing through Trump's tweet.

Tillerson, said Goldstein, had "every intention of staying because of the critical progress made in national security."

Goldstein was promptly also sacked for his impudence at telling the truth, making the White House crew out to be a pack of liars.

It's amazing how Trump aspires to "class" and yet demonstrates none himself. He surrounds himself with opulence, usually in the guise of pseudo period trinkets, lots of marble and especially gold. Take it from Peter York, Trump's style is "classic dictator."

York would know. A decade before the Mango Mussolini claimed the White House, York wrote a book on what he called "dictator chic," a style popularized by such grand despots as Milosevic, Ceausescu, Saddam Hussein, Gadaffi, pretty much every Arab grandee, Ukraine's Yanukovych, Mugabe and more. He identified the 10 decorating rules of dictator chic. Check it out. It's good for a chuckle.

Tillerson warned yesterday that Russia's poisoning of an ex-spy in Britain would "certainly trigger a response." I'll bet this wasn't the response he expected!

But Pooty-Poor doesn't like even vague threats and it was time for Rexit. Fortunately, Pompeo was waiting in the bullpen, having passed his vetting in January. So much winning!


I had that in mind, Cap, when I did the follow-on post. While searching for the Tillerson/sanctions story from yesterday I came across David Frum's piece today in the Atlantic. It's worth a read.

I see the Under Secretary of State Goldstein was also fired for contradicting the WH account of Tillerson's firing. As former ethics lawyer Norm Risen quipped, "in previous administrations you got fired for lying; in this one, you get fired if you are caught telling the truth."


Goldstein would have known he was signing his own death warrant by releasing such a clear statement pointedly contradicting the Trump White House narrative.

Funny about Trump's marble fetish. There's a stock photo of him in front of dark green marble at Marred de Lego . When I was building a house with minimal funds, I bought a bunch of the same marble for the kitchen counter . The 12" x 12" tiles were made in China and cost 25 cents each at a yard sale. Huuuuuge.

And, Rumley, we know how fond of Chinese steel products Trump was when it came to his construction projects.