It's On. Canada Won't Get a Pass in Trump's Trade War. 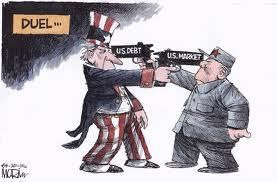 CBC News reports that Canada's hope to be exempt from Trump's trade war on imported steel and aluminium has been shot down.

There's been speculation that the tariff regime could possibly finish off any future for NAFTA, the North American Free Trade Agreement.

To apply the tariffs, the U.S. is invoking a rarely used clause in a 1962 trade law that allows the president to declare tariffs if required by national security. The White House argues that the wording is broad, and that national security also could include employment and economic stability of the domestic steel industry.

Every host of the big weekly U.S. talk shows raised the Canada angle.

Fox News's Chris Wallace asked how the White House can possibly justify using a national security excuse for imposing tariffs on a close NATO partner, and legal member of the U.S. military-industrial complex.

CNN's Jake Tapper asked Navarro to imagine how Canada might see this: "From the perspective of Canada ... Canada would say, 'National security exemption? We fight with you in every war. Our soldiers are right next to your soldiers in every conflict. What possible scenario could you envision where we wouldn't supply you with steel and aluminum?"'

But the general response from Trump officials was that everyone should prepare for tariffs. When Navarro was asked on Fox whether Trump would exclude anyone, he responded in the negative.

"That's not his decision," Navarro replied.

"As soon as he starts exempting countries he has to raise tariffs on everybody else. As soon as he exempts one country his phone starts ringing from the heads of state of other countries."

He added more details in an interview with CNN: "Canada's 40 per cent of the (American aluminum) market. If you exempt Canada, then you have to put big, big tariffs on everybody else. So this is a measured, targeted approach."

It strikes me that, if Canada is to be branded a national security threat to the United States, it would be prudent for us to put all military cooperation with the Americans on hold.  We're not only their dutiful foot soldiers, essentially America's Foreign Legion, but we're also their eyes and ears on their exposed northern flank. Just until we get everything sorted out, you understand.
Posted by The Mound of Sound at 3:09 PM

Your last paragraph is what I was thinking. If this goes ahead, Canada should exit NATO and the Canadian forces should train to defend Canada. As I have said before, it's not the Marines we need to worry about; rather it's Gomer and Billy Bob and Jethro and whichever morons getting silly ideas about Manifest Destiny.


Toby, I would like to see Canada's military aligned more closely with Europe and distanced somewhat from America. A good starting point would be to consider a European replacement for our aging CF-18s. To hell with Boeing and to hell with Lockheed.

There is probably more inter-provincial trade in Canada than there is trade heading south of the 49th.

If the Republicans are so determined to support Trump, we’d be smarter to bail now than later.

Whichever industries he targets, we should set up federal banks for, stockpile the production and ship it to other countries that exhibit some concept of what “trade” is all about.

Agreed. Especially about distancing from Boeing and Lockheed and any other military contractors.

Trump must be loving all the attention he's getting from world leaders over these tariffs. Theresa May was sucking up to him today and I'm sure JT has or will be pleading with him too.

Screw him. Cut off his supply of maple syrup and Canadian bacon. That'll hit him right in the gut.

It would take a measured and thoughtful approach to over-ruling trade deals with other nations. It'll be interesting to observe how both the USA and Canada deal with the repercussions of their decisions in the past two years.

It was always a possibility the USA would disengage from the free trade deals it had set up. If Canada's not prepared despite the warnings and provocations from the US, then shame on Canada.

Things don't have to be disastrous. But it's probably better to prepare for tough days ahead.

It's not wise to treat one's best friends the same way one would treat a total stranger.

I doubt Trump will go through with this threat on tariffs. Global supply chains are far too integrated now, and the costs to US multinationals of disintegrating would be staggering. Far from helping to repatriate American supply chains, the proposed tariffs simply encourage US companies to offshore manufacturing to avoid the raw materials tariffs.

But the proposal does serve three purposes useful to Trump even if it never goes ahead. First, it helps shore up Republican prospects in a Pennsylvania special election in a couple of weeks.

Finally, the move helps advance Russian objectives of destabilizing western alliances. So it fits with other moves Trump has made on pulling out of, or threatening to pull out of, multilateral agreements. In short, regardless of whether he follows through, the tariffs further the interests of the Little Kremlin on the Potomac.

@ Tal Hartsfeld. It's telling how often you, a guy from Ohio, and I, an old geezer from Vancouver Island, so closely agree. There's something worth recalling in that when individuals do things that drive wedges between our two countries. We, most of us at least, are not as different as they would have us believe or, more accurately, as they would have us come to believe.

Just who are "they" ?
Whilst there are many realistic people in the USA it is rapidly becoming, from all accounts I have seen and experienced, a dysfunctional and divided country.
This is not wishful thinking but a sad commentary on a country that 'could' have been a beacon of hope for many peoples.

There is no question the US is fast becoming a divided country. This great "dealmaker" the gullabilities elected is nothing more than a sham. Spending several months each winter in the southern climes, I have found that the biggest Trump fans seem to live in Alberta. I keep thinking that if the Donald wants to enforce all sorts of trade restrictions with a view to bringing jobs back to the US, one of the first things he might have done is to tell Ivanka that she can no longer import her very expensively priced junk made in China to the USA. That might have convinced even the most dull of dullards that he was serious. But, no, the Donald is just another shaman on the trail of enriching his personal insecure self.