The Tyee Outs Trudeau on the Green Pipeline Scam 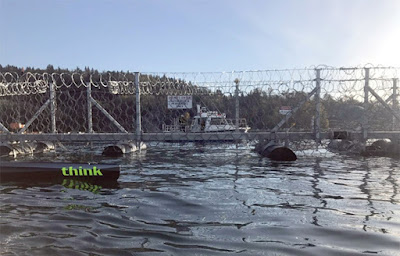 Justin Trudeau sticks tenaciously to his story that the Kinder Morgan dilbit pipeline is the price we must pay for a low-carbon Canada. What Trudeau is referring to is his flaccid (yes, as in "limp dick") carbon pricing scheme that only serves to demonstrate how disingenuous this prime minister is when it comes to tackling climate change.

Writing in The Tyee, Mitchell Anderson reveals the underhanded nature of Justin Trudeau.

Politics have been described as the art of the possible and in fairness, Notley is in a bind. Is it possible that a woman could be re-elected as NDP premier in a province whose national emblem might be truck nuts? Recall the mob gathered on the legislature lawn chanting, “lock her up” in an embarrassing display of endemic dumbass.

In spite of steady leadership on many issues, a December poll showed only one-third of voters approved of her performance as premier.

What to do? Picking a fight with B.C. over pipelines is an easy win, supported by 82 per cent of Albertans. However, this gratuitous gambit may not carry the day. United Conservative Party leader Jason Kenney leads by 14 per cent in the polls and offers Albertans a more authentic version of the same oil industry policies that squandered a vast resource bounty with virtually nothing to show for it other than a $45 billion debt.

And what about our prime minister? Where does he stand? In spite of his aggressive eco-branding, Justin Trudeau has been unabashedly pro-pipeline. Look no further than this remarkably fawning speech he delivered to the energy industry in Houston, Texas last year, beginning with a pointed mea culpa about his father’s National Energy Program. “It was a failure… The NEP introduced a level of state control over energy that hurt growth and jobs.”

Trudeau went on to brag to about delivering three new pipeline approvals for unrefined bitumen from Alberta. “I make no bones about it. We’re very proud of this… No country would find 173 billion barrels of oil in the ground and just leave them there.”

Extracting, transporting, refining and burning those 173 billion barrels of bitumen will dump some 122 billion tonnes of CO2 in the atmosphere, yet Trudeau maintains even to Bill Nye that this is the best way to fight climate change.

Interestingly, there is a missing video potion of his speech at the 11:35 mark. A written transcript reveals the omitted words: “And let me be very clear. We could not have moved forward on pipelines had we not acted on climate.”

Trudeau seems to be intimating to his Texan hosts that the proposed federal carbon-pricing scheme was the required policy fig leaf to push through contentious pipeline approvals. “Our immediate predecessors tried a different route for 10 years - to ignore the environment. It didn’t work any more than the NEP of the 1980s worked. They couldn’t move forward on big energy projects.” If oil-friendly former prime minister Stephen Harper couldn’t deliver pipelines, perhaps the influential power brokers within the petroleum sector merely switched horses.

But what about those subsidies to the bitumen barons?

It seems the oil industry “spear carriers” have hit the mark with the current government. On the campaign trail, Trudeau specifically pledged on page five of the Liberals’ environment platform that “we will fulfill Canada’s G-20 commitment to phase out subsidies for the fossil fuel industry.”

In 2017, Auditor General Michael Ferguson tried to investigate what progress, if any, was being made in phasing out such public gifts to the oil and gas sector but was stonewalled by the finance department, which refused to provide the required documents. However, Ferguson was able to conclude that the Trudeau government had failed to even define how it interpreted this commitment.
Efforts to obscure Trudeau’s inaction on this file seem to have reached absurd levels. A scheduled public parliamentary committee hearing on energy subsidies last October was abruptly declared in camera by Liberal co-chair Alexandra Mendès, ostensibly to put witnesses “at ease.” The cryptic minutes from this suddenly secret meeting state, “It was agreed… that consideration of Report 7, Fossil Fuel Subsidies, of the Spring 2017 Reports of the Auditor General of Canada be postponed until further notice.” Problem solved.

Instead of eliminating the many federal petroleum subsidies, totalling almost $1.3 billion annually, the Trudeau government has locked some in until 2025. Direct government gifts to the fossil fuel sector top $3.3 billion when provincial subsidies are included - an amount that works out to about $19 per tonne of CO2 emissions or $237 per Canadian household.

Photo: Kinder Morgan's compound in Vancouver's inner harbour cordoned off with razor wire, the stuff that's usually found at concentration camps and prisons. Nice touch. Lets us know where we stand. Keeps us in our place - even on our waters.

This is further proof that Trudeau has been lying to us.

Is there a comprehensive list of Trudeau's reneged policies?

Yes and if you factor in the billions of litres of FREE water they get its even worse. I can't wait until the tarsands final death heave and all the resulting "Sequoia Resources"where companies walk away from their very limited responsibilities leaving Alberta taxpayers on the hook. How long before they come begging the feds for handouts. Solar will be killing the oil industry sooner than people think.


If somebody is maintaining such a list, Toby, I've not heard of it. How could such a list ever be accurate? This is a guy who panders. He says what he perceives we want to here and does it with great sincerity and then simply fails to deliver, sometimes with an utterly disingenuous and cursory apology.

I have reluctantly come to realize that with Trudeau, as with Trump, you're best to ignore what he says and focus on what he does instead. That's made the easier when you realize that, on his list of priorities, his personal political fortunes routinely come ahead of the interests of the country and our people.

Trudeau is bereft of the leadership skills and talent needed to handle the enormous challenges of the day and so he shrinks them to something he finds manageable. A fine example of that is his laughable carbon-pricing policy.

@ JasonS - I hope your prediction about solar displacing fossil energy comes to pass. It should but there is something in the order of 27 trillion dollars of proven fossil reserves on stock markets and bourses around the world. Much of that wealth has been subscribed by institutional lenders, banks and pension funds. Writing that off will cause enormous economic dislocation, utter chaos. The energy giants know it. Governments know it. They're playing for keeps - short-term to be sure - but it is powerful enough that they're willing to keep ignoring the long-term consequences they're triggering.

The stonewalling on subsidies is very worrying, Mound. It tells me the pipeline and oil and gas companies have some sweetheart subsidies Trudeau doesn't want us knowing about.

As I explained in an earlier post, there's no business case for the KXL or TM pipelines. That means they won't be built without subsidies. But if Canadians knew how much they were paying for each pipeline job, they'd hit the roof. I bet the feds are also on the hook if the pipelines don't go ahead.

I expect we'll eventually learn that Trudeau and Morneau's P3 infrastructure bank is a ruse to shift these subsidies off the Fed's books and onto the private banks' books, where they can't be subject to detailed questioning in parliament or pesky FOIA requests. Naturally, this secrecy doesn't come free, and the banks will make a healthy profit while Canadians are kept in the dark. Win, win for our neoliberal overlords.


What's also galling, Cap, are the hidden or indirect subsidies that the IMF used in calculating that the real level of subsidies exceeds $40-billion annually for Canada and some $5.3 trillion globally. There are massive real costs that our governments treat as externalities to keep them off the books that are, in reality, merely deferred liabilities that will be passed on to future generations. It's a con game and our smart young man, Trudeau, is every bit as adept at it as his predecessor, the evil Harper.