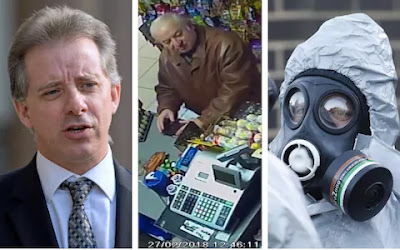 He was a former Russian intelligence officer nabbed in Moscow in 2004 for having betrayed his country to Britain's MI6 in the 1990s and early 2000s. He was a colonel when he retired in 1999, moving on to work for the Russian Foreign Ministry. Tried and convicted of high treason, Sergei Skripal was handed over to the Brits in the "illegals programme" spy swap of 2010.

Days ago Skripal and his daughter, Yulia, were found unconscious on a park bench, the victims of a nerve agent. For a while it sounded like shades of defector Alexander Litvinenko, poisoned with a cup of tea laced with polonium in London in 2006, a murder at the time widely attributed to Vladimir Putin.

Only this time there are other characters on the periphery - Christopher Steele, author of the controversial "dossier" that suggests the Russians have something on Donald Trump.

Sergei Skripal, 66, and his daughter Yulia, 33, were in critical but stable condition in intensive care after the attack in Salisbury on Sunday afternoon, UK time. There are reportedly fears that Skripal was unlikely to recover, though his daughter has a better chance.

Skripal was convicted of treason and imprisoned in 2006 in Russia for passing intelligence to MI6. In 2010 he was pardoned and sent to the UK as part of a spy swap deal.

The London Telegraph reported that he moved to Salisbury and became close to a security consultant employed by Christopher Steele, a former spy who founded an investigative research firm called Orbis Business Intelligence.

The consultant, who is based in Salisbury, listed work with Orbis on his LinkedIn account, the Telegraph said.

The Telegraph said a “hit squad” was dispatched by the Kremlin to assassinate Skripal, to send a message that traitors were not tolerated.

UK intelligence services suspect the attack was delayed by the snowstorm that enveloped Britain last week, which kept Skripal and his daughters indoors and made the assassination squad’s escape from the country more problematic.

“By Sunday afternoon, with Miss Skripal on the brink of returning to Moscow, the assassination squad had little room for manoeuvre and were forced into action in broad daylight in the middle of a busy shopping precinct,” the Telegraph reported.

The Trump dossier – a series of memoranda sent by Steele to his contractor in the US - alleged the Russian secret services possessed compromising material that could be used to blackmail Trump, such as a video of him engaging in “perverted sexual acts” in a Russian hotel.

The sources were described in a report in The New Yorker as hotel staff, a close Trump associate, and a former top-level Russian intelligence officer still active inside the Kremlin.

Steele redacted his sources from the dossier, fearing exposure would be a death sentence.

In 2016 he briefed some US reporters about the contents of the dossier. In early 2017 Buzzfeed published the dossier in full.

Last year a lawyer for Glenn Simpson, head of the company that commissioned Steele’s investigation of Trump, told the US Senate Judiciary Committee that “somebody’s already been killed as a result of the publication of this dossier”.

Media speculated this was Oleg Erovinkin, a former Russian intelligence officer and chief of staff to the president of oil giant Rosneft. Erovinkin was found dead in his car in December 2016, and it was later claimed he died of a heart attack.

Why would anyone set out to murder Skripal? Whatever Trump did in Moscow during the Miss Universe pageant happened in 2013, three years after Skripal was handed over to the Brits. If Skripal contributed anything material to Steele's Trump dossier he would have had to get it from some confidante still at large in Putin's Russia. Maybe that's the answer. Perhaps the Russians attacked Skripal pour encourager les autres, a warning to any leakers in Moscow.
Posted by The Mound of Sound at 11:43 AM

And as a message to Comrade Trumpov that we've got your back for now, but won't wait forever for the rollback of Obama's sanctions?

Anyong...when Skripal was handed over to the Brits, Putin made a public pronouncement he would get Skripal. It was broadcast on BBC several nights ago through CBC.