The Gospel of "Don't Believe Your Lyin' Ears." 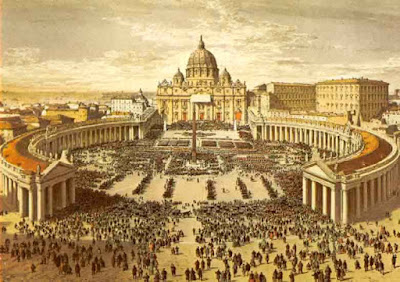 The Vatican is racing to clear up the confusion after Pope Francis said that Hell doesn't exist. They've been screwin' with you these past two millennia. Just havin' you on.

The Holy See issued a terse statement saying a lengthy article published in La Repubblica on Wednesday by Eugenio Scalfari, 93, the newspaper’s founder, was “the fruit of his reconstruction” and not “a faithful transcription of the Holy Father’s words”.

While the Vatican conceded that Scalfari, an atheist who struck up a friendship with Francis in 2013, had held a private meeting with the pontiff before the Easter weekend, it said an interview had not been granted.

During the meeting Scalfari asked the pope where “bad souls” go, to which he was quoted as responding: “They are not punished. Those who repent obtain God’s forgiveness and take their place among the ranks of those who contemplate him, but those who do not repent and cannot be forgiven disappear. A hell doesn’t exist, the disappearance of sinning souls exists.”

In the immortal words of Saint John

Other than holy shit; this has no reason to be posted

Eat your heart out Mound.

Satan, get thee behind me. Pretty sweet. I like everything I see - until I see the brakes, those drum brakes. Try going down a Spanish mountain with a million hairpin switchbacks and nothing but those drums to keep you on the road.

If you get the yearning, try to get to England this time next month for Bonhams. If you don't mind, pick up a Vincent for me.

The trouble with religion today is that there are too many literalists and not enough of those who understand the place of mythology.